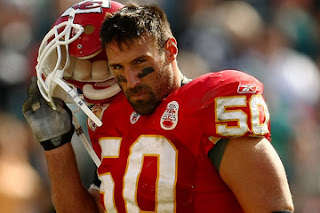 Whether we have an NFL season or not, Mike Vrabel's NFL days are over. Vrabel has retired from the NFL to take a position at Ohio State as linebackers coach. Ohio State is Vrabel's alma mater.

The move comes as a shock to the Kansas City Chiefs' organization, who still had Vrabel listed as a starting linebacker. All reports indicate that the Chiefs expected Vrabel to both return for this season and see significant playing time.

Then again, with Vrabel's career coming to an end, the move makes sense. Vrabel wanted to get into coaching, and being a position coach for the college he played for is a dream job. He knew this opportunity may never open up again, and while unexpected, this is different than a player quitting a team for other personal reasons.

Vrabel was a two time All-American at Ohio State, and won three super bowl titles with the New England Patriots.
at 8:11 AM No comments: