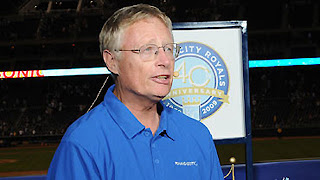 Royals Hall of Fame pitcher and broadcaster Paul Splittorff has died. He died this morning at the family home in Blue Springs form Oral Cancer and Melanoma. Splittorff was hospitalized last week and the speculation was that he was very sick, with one local blog reporting he had been given last rights. He was a very private man who had obviously been having some sort of medical issue for a few years as anyone who has seen his broadcasting lately could tell you. His voice was not up to par, and sometimes he was difficult to understand. Splittorf would claim it was a viral infection causing his issues and he kept working up until two weeks ago.

Paul Splittorff was a fixture in the Royal's rotation for 14 years, from 1970 - 1984, he retired one year before the World Championship. Though he was probably never the best pitcher in the rotation at any given time (he pitched with the likes of Busby, Leonard, and Gura), his longevity made him the Royals all time leader in victories with 166. He was also the Royals first 20 game winner in 1973. He was inducted into the Royals Hall of Fame in 1987

Splittorff then went on to a long broadcasting career with the Royals, 27 years. He also did basketball games for the Big 12. Paul Splittorff was 64.
at 10:53 AM No comments: