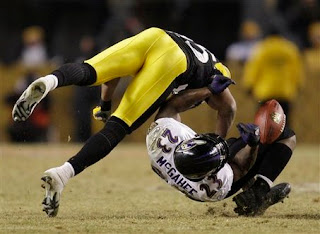 NFL Commissioner Roger Goodell is taking a strong stance on illegal hits, issuing several fines for players who committed vicious hits last Sunday. According to Goodell, the NFL will continue to enforce its current policy towards illegal hits, and may increase fines. The commissioner did rule out new in-game punishments such as ejections.

The new rules have players all around the league crying foul, arguing the new rules take away from the neccessary violent nature of the sport. Many argue that the NFL is moving towards flag football territory, and that new stance taken by the league gives an unfair advantage to players on offense. Steelers LB James Harrison is so upset after his $75,000 fine that he is now considering retiring from the league.

Most of the controversy stems from helmet-to-helmet hits, as the NFL is trying to take a more proactive approach on concussions and head trauma. Most players say that unless the league forces them to play without helmets, they are going to use their hats as a weapon. Legendary Penn State coach Joe Paterno has an interesting take on the issue, advocating that football should eliminate facemasks. Many other coaches and players, including Mike Ditka, agree with Joe Pa, feeling that the facemasks are used as a weapon and eliminating them would lead to less vicious hits. It is an interesting idea, however I'd like to see football stay football, and not move into rugby territory.
at 8:25 AM No comments: