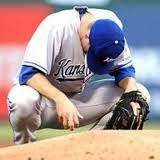 You've got to hand it to the Royals, at least they are consistent. Kansas City fell to the Minnesota Twins last night, 4-3, at Target Field which has been a house of horrors for the Royals this season. The Royals latest dismal showing in Minneapolis (the team finished 2-7 there this season) guarantees the Royals will finish with a losing record for the 15th time in the last 16 seasons. And you thought this guy was the benchmark for consistency.

With the Royals' season now painfully behind us, Kansas City fans can reflect on another "promising" year that ultimately went down in flames. Many sports pundits and fans predicted the team to improve, however inconsistency from the entire club lead to long losing streaks and forced the team to ultimately trade all of its veterans and groom younger players. Zach Grienke was wildly unpredictable compared to his previous Cy Young winning form, as well as the entire bullpen ranging from average to downright scary.

So yet another rebuilding effort starts in Kansas City, yet the Royals seem to finally be learning their lesson from past failures. The Royals already boast a very loaded farm system and have young players already producing for the team like Grienke, Joakim Soria and more. Hopefully instead of foolishly spending on veterans like Jose Guillen and Gil Meche, the Royals will learn from the Tampa Bay Rays and Florida Marlins, two teams that groomed young players and became successful without spending big money. If not, the Royals organization will be in danger of continuing its streak of mediocrity, despite how impressive it is.