Royals Trade of Podsednik Signals Building for the Future 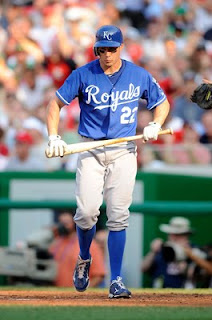 The Royals traded veteran outfielder Scott Podsednik to the Los Angeles Dodgers for two minor league players. The trade is right on the heals of another Royals deal that sent Alberto Callaspo to Anaheim for a young major league pitcher and another prospect. The moves send a clear message from the organization to its fans: the Royals are in another rebuilding project, and they are just getting started.
Both Callaspo and Podsednik have been very productive for the Royals, and have been some of the few bright spots in an otherwise underachieving offense. Podsednik is getting up there in age, yet has hit over .300 consistently this season, and Callaspo has been good both offensively and defensively during his career in Kansas City.
It is common sense for struggling teams to trade its better veteran players to plan for the future. The problem is, the Royals have been repeating this plan of action since I was born. Alex Gordon, who has been an absolute bust since being taken early in the draft, is slated to be Podsednik's full time replacement. The Royals did acquire some young talent, but what are the odds they will ever produce like Podsednik and Callaspo have in Kansas City? Given the Royals history, the odds are stacked against this happening.
I can't argue with the Royals' plan of action, in principle it makes sense. However, given the way Podsednik, Callaspo and the rest of the offense has produced, I would have liked to have seen Kansas City keep its offense together and get some pitching help. The deals are done though, and we will now enter Royals rebuilding project take 22.
Comments?
at 8:25 PM No comments: