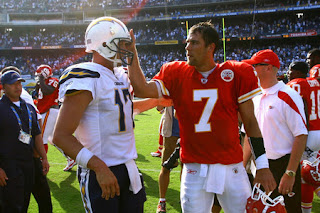 The Chiefs had a disastrous start to their 2012 season, losing its first two games in convincing fashion. Last week, Kansas City was able to save its season and turn things around in a thrilling overtime victory over the New Orleans Saints. If the Chiefs want to keep their momentum going and pull to .500 on the season, they will need to take down a familiar foe: the San Diego Chargers.

The first two weeks were a complete opposite for the Chargers, who cruised out to a 2-0 record. However, last week the team got absolutely shut down by the Atlanta Falcons, losing at home 27-3. Atlanta looks like one of the best teams in the league this year, but it was a disheartening effort for Chargers fans who thought the team’s early season struggles were a thing of the past. The biggest cause for concern with the Chargers is turnovers – Phillip Rivers threw two interceptions against Atlanta and has three this season. Rivers threw a whopping 20 picks last year, and has three so far this season. After taking good care of the football throughout his career, Rivers has been shaky lately, and the Chiefs’ secondary should have some chances to make a play. San Diego also has running back Ryan Mathews back from injury, although he lost a fumble last week and has a bad reputation of coughing up the football. The Chiefs should have a good chance to force some turnovers on Sunday, which could be the biggest factor in the game.

The Chiefs have been battling injuries all season, and this game will be no different. Dexter McCluster, Peyton Hillis and Kevin Boss all got hurt against the Saints, and Hillis and Boss both have missed practice this week (while McCluster has been very limited). The team also lost starting center Rodney Hudson, who broke a bone in his leg and was placed on injured reserve. Ryan Lilja will move from guard to center to replace Hudson, while rookie Jeff Allen will start at guard. Kansas City already had some key injuries on defense, and now will have to rely on several rookies and inexperienced players to contribute.

The last two meetings between these two teams were decided by a field goal, and this game has all the makings of another nail bitter. The Chiefs must take advantage of San Diego’s tendency to turn the ball over to pull this one out, and simply cannot afford to lose any more starters to injury.