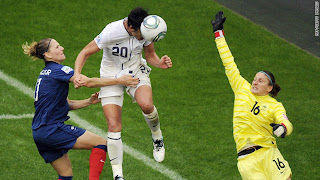 The trip to the finals will be team USA's first since 1999, the year the Americans defeated China to win the cup. Up next for the Americans is either Sweden - who beat the US in the group stage - or Japan. The final will be held on Sunday.
at 9:00 AM No comments: