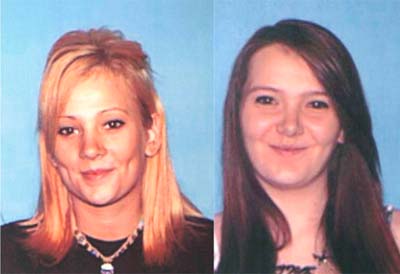 The Platte County Sheriff's Office announced that Ashley Key and Britny Haarup are officially missing from Edgerton, Missouri as of today.  Key and Haarup were last seen in Edgerton on Friday morning. Just a few minutes ago police found a 2002 Dodge Ram 2500 Series pickup truck abandoned along Clinton County Line Road near the small town of Trimble, Missouri. It is believed that this was the truck that the girls were last seen driving. Ashley Key and Britny Haarup were first reported missing when a call came in to police reporting two children that had been left at home unattended. The children belonged to Britny Haarup, and they are now safe in the care of their father in Edgerton, Missouri.

Britny Haarup is 19 years old, is 5'3" / 130, and Ashley Key is 22 years old and 5'5" 100. No further information has been released about the girls and their typical social lives. The discovery of the abandoned truck on the side of the road definitely raises a flag of foul play. The road that the girls' truck was found on today was a gravel / dirt road and the truck appeared to have been carefully pulled over to the side of the road and parked neatly off to the side of 200th street near 169 Highway and about 3 miles away from Trimble, Missouri. Police are searching for Britny Haarup and Ashley Key today in the surrounding areas near the abandoned truck.

If you have any information on the missing Edgerton girls please contact the Platte County Sherrif's Office at 816-858-3521.