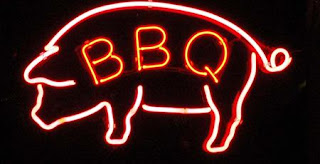 A lot has changed in recent years regarding Kansas City's biggest BBQ contest. For those of you who have never been, the American Royal BBQ contest is a giant grid of private parties who are entered in the BBQ competition. It's basically like a bunch of little backyard BBQ parties, except they're spread out across Kemper Arena parking lot in little squares. Now, in the old days, if you weren't invited to one of the parties, you didn't eat or drink and you just basically paid $10 to walk around and smell everyone's food. In the years of late that has changed and you can now purchase great barbecue and drinks out on the main concourse.

American Royal BBQ 2010 Entertainment
Most of the private parties have their own entertainment, from live bands to DJs, and there is also a main stage that is open to the public. For the 2010 American Royal BBQ the main stage will feature Liverpool - a Tribute to The Beatles. If you haven't seen these guys you should check them out, they do an authentic Beatles tribute down to the last detail. Last year the main stage was rockin' with an awesome line up of Brody Buster followed by headliners The KC All Stars. The live music on the main stage is followed by a great fireworks show.