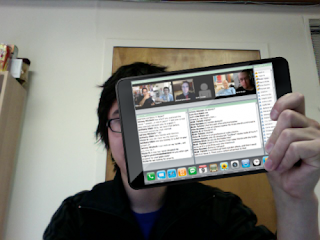 Apple CEO Steve Jobs unveiled the all new Apple iPad Tablet today with a live demonstration in California today. Our overall reaction, "it's O.K." - nothing really spectacular about it, it's basically a giant iPhone.

It is small, and FLAT. This thing is as flat as they get at 1/2 an inch thick and weighs 1.5 pounds.

It has all of the apps that Apple users are used to from their iBooks and iPhones.

It is great for reading books, magazines and newspapers. According to the Apple iPad Tablet demo, the book section is really cool with a virtual video bookshelf compliments of Amazon, which shows your books on the shelf as if at home in your library. Steve Jobs also demoed the iPad by showing his ease of navigation through today's New York Times.

Cost - the Apple iPad is surprisingly affordable at $499. That's a shocker - considering it came from "we're so proud of our junk" Apple Computers.

So what, it's a giant iPhone! It doesn't fit in your pocket, and it doesn't have the nice large screen of your iBook or PC laptop.

No USB port - uh, this is a major oversight - I would think that a USB port would be nice.

Did not live up to the hype. The hype, in the case of the Apple iPad tablet, was much larger than the product itself. Great marketing tactic, however, you gotta give 'em that. They promised that it would revolutionize and change everything - but all it really revolutionized was the current electronic book-reading devices such as the Kindle by Amazon.
at 6:40 PM No comments: