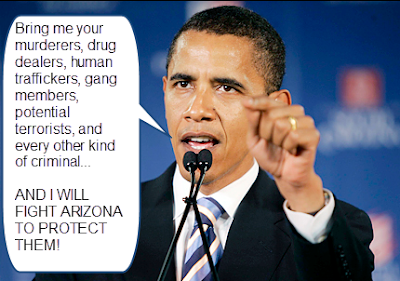 Leadership in Arizona vs. The "leadership" in the White House
by Sir Otilc, Kansas City News Blog

I am sick to my stomach at the number of Americans who aren't paying attention to what is happening to our country at the hands of Barack Obama. How can you be the President of the United States...knowing that murderers, drug dealers, human traffickers, gang members, potential terrorists, and every other kind of criminal we do not want in the United States, is free to cross the border, disrespect our country and everyone who has ever come here legally...and knowingly condone the behavior? Why wouldn't that outrage you as President? Why would you publicly fight and use the Department of Justice to allow it to continue?

Arizona's Janice K. Brewer has more round ones than Barack Obama will ever have. Not only has she had to fight illegal immigration for years which forced her to take direct state action because the Federal Government wouldn't (Obama is not the only one to blame for this), but now she has been forced to square off with The United States of America because our President is afraid (a common theme for the spineless, castrated one).

Why is our President so spine-o-ball-less? I am guessing many reasons. The first is that if Arizona is successful in getting rid of illegal immigrants, other states will follow. If other states follow, then there will be no illegal immigrants to vote for Obama in 2012 when he grants them amnesty (illegal immigrants might be the ONLY people to vote for him at this point). Another reason might be that by not offending the illegal immigrants, he stays consistent with his World Apology Tour where it is more important to him to apologize to every nation/person for America being so horrible (the most giving country on earth and the one country where freedom prevails...unless you count the sex slave traffickers the President encourages and condones by fighting Jan Brewer and the state of Arizona). Another reason is that people will think he is racist. This one is my favorite because only the racist is more concerned with race than protecting the law of the land, using their brain to figure out where injustice is happening and correcting it, and allows issues of race to cloud judgment. Illegal immigration has nothing to do with race...and fighting it shouldn't either!

Anyone can criticize and I usually tell them to get it out of their system then shut up and tell the rest of us how you would fix the problem. So here is what I would do in his shoes. First I would acknowledge to the world that America is a great country, in fact we believe it is the greatest country on earth. Then I would go on to explain that we are made up of LEGAL immigrants, that we welcome legal immigration, that the problems that DON'T exist at the Northern border of the U.S. DO exist at the Southern border and we need to do something about it. I would publicly give illegals a warning that the U.S. is coming after them and they should peacefully leave our country. I would make sure I used every resource in my power to help them leave the country. I would figure out how to come down hard on sanctuary cities (with a warning first). I would create the biggest tent city in America where Joe Arpaio clothes illegal immigrants in pink and makes doing time for illegal immigration as short, but unpleasant as possible. Then I would make sure we had the manpower to create a sensible LEGAL immigration system where the people who just left our country could come right back (depending on where they were went after being deported)...but legally, above board, out in the open, no more hiding, no more shame, no more dodging taxes, no more bringing down the health care system, no more (fill in the blank)...

Openly fighting a state (Arizona) who is trying to protect themselves is an insulting and disrespectful slap in the face by the U.S. government to the citizens who are suffering the negative effects of illegal immigration in that state. But sadly this isn't Barack Obama's only slap in the face to America...but it does make his top 10 list of things that leave Americans outraged (notice I didn't say top 3).