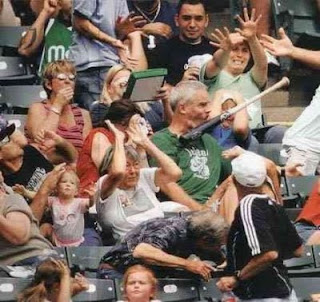 Kansas City Royals fans are talking about safety nets at the K as 4 people have been hit by flying baseball bats at Kauffman Stadium already this year. Last night was a bad one as a 5 year old boy was hit by a bat that flew over the 3rd base dugout. Although the TV cameras didn't close in very close (probably by strict instruction), we could tell that the injury was bad because the TV announcers didn't even talk for a full 30 seconds of dead air while waiting to try and see some sign of "all clear" from the stands.

We were at the stadium in the lower level seats behind the Royals dugout and witnessed another of the 4 flying bats when a woman was struck in the head. She was only a few rows over from us in the Gold premier section and at first I don't even think that the woman knew that she had been struck. A brave fan in the row in front of her had tried very hard to catch the bat before it flew out of control behind him, but as anyone can imagine, it is nearly impossible to catch a spinning, flying baseball bat out of thin air without it striking you or someone around you. It's just not possible. The woman's injury was hard to surmise as head injuries can be very bloody, even if the injury is only a minor surface wound. But a'bleedin' she was, and they took her off up the ramp somewhere - not sure if they take them to their own medical facility or call an ambulance...and also not sure who would pay for the ambulance. I know that the stadium is not responsible for injuries, says so right on the back of your ticket.

Imagine if you and I stood about 100 feet apart and I with my 6'1 / 190lb frame flung a 37 inch baseball bat at you at high velocity, there is no way that you are going to catch that bat cleanly and without some sort of minor or major injury - it just can't be done. Both the coaches and the players at Kauffman have voiced their concerns over putting up some extra netting near the 1st and 3rd base lines. The Royals front office, as they are well trained to say, will simply tell you that the fans should be "paying attention" during gameplay and thus avoiding such injuries. That's all well and good for baseballs, they are round, hand sized, and even though someone occasionally gets bonked on the head, the baseballs are pretty harmless, and 9 times out of 10 some skilled fan gets a hand on the baseballs before they do any harm to any fans. Bats, however, are a completely different animal; absolutely unpredictable in flight, spinning awkwardly and randomly into the stands - again, I was about 15 feet away from one that came flying at us and I would have had almost no chance of knocking that thing out of the air before it struck someone - and I used to be a professional athlete! If you come from an athletic background, and you are in shape and all, you would like to think that you could wrangle a flying bat out of the air, but you would be wrong - it's harder than it looks.

Ok, so if you're the Royals front office, what do you do about the flying bats and resulting fan injury? Well, at this point there is no plan to install more netting to catch the errant bats. There is a reason for this. If the Royals give in and install netting now, the fans who have been hit will likely sue the Royals because the fact that they installed new nets would indicate an admission of guilt or negligence on the Royals part. So basically it is a catch 22 for the Royals front office. Sure, a few ticket holders would complain about having to watch the game through the new netting, but I'm sure that if they or any of their friends or family suffered a serious injury from a flying baseball bat while watching a game on a Sunday afternoon that suddenly turned into a bloody panic, they would change their tune.

As it stands right now, the MLB is the only professional sports institution that has not completely solved it's fan safety issues.