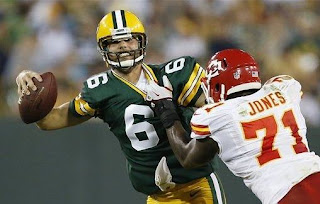 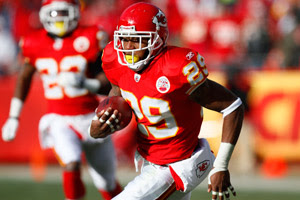 On September 11th, 2011 Eric Berry was sidelined for the remainder of the 2011 season after suffering a torn ACL in the 2nd play from the line of scrimmage in Sunday's game. Eric Berry will have to undergo surgery immediately for his injury and has been ruled out for the season.
Sunday at Arrowhead Stadium was indeed a dismal day for Kansas City Chiefs fans as the Chiefs took on the Buffalo Bills. In an emotional pre game show dedicated to the 10th Anniversary of the events of 9/11, Arrowhead Stadium was filled to the brim with fans chanting "USA, USA, USA..." and in a live television multicast there was a special performance of Taps and a moment of silence. The best part of the entire day was the incredible fly over by the US Military's A10 Warthog formation, and then...the game started.
The first play of the game on September 11th, 2011 vs. the Buffalo Bills was a kickoff to Dexter McCluster of the Kansas City Chiefs, who proceeded to fumble the ball and turn it over to the Bills on the 10 yard line. Only two plays later, Eric Berry left the field with a season-ending torn ACL injury. The rest of the game was a pathetic showing of what some may even doubt was professional football as the Chiefs went on to lose the game by a score of 41 to 7. Local sports radio shows are on fire today as Chiefs fans are calling in by the thousand in complete disbelief of what they witnessed on the field yesterday. The Bills ran up and down the field at will, mostly using the tight end and completely violated the Kansas City Chiefs defense. The Kansas City Chiefs will have a lot of explaining to do at tonight's live remote from Jazz at The Legends. Of course the have the most reserved and soft spoken Chief representing the team at the live remote in Jamaal Charles. I'm sure that he will not resolve any of the Chiefs fan's inquiries in any sort of coherent manner, Charles will most likely answer with his "cliff note" list of scripted answers such as "Well, I know that we're going to try to get better every week..." and other generic responses.
The loss of Eric Berry will be a huge impact on the Chiefs defense as he was one of the premier players on the team. The Strong Safety duties will now be split between Jon McGraw, Kendrick Lewis, and possibly Sabbi Piscitelli.
at 2:09 PM No comments: 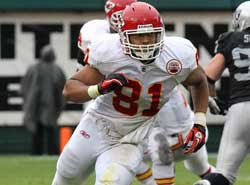 Well we finally made it through the grueling Chiefs preseason. Although in retrospect it was by a stroke of luck that we had football going on at all, so in that light we'll take what we can get.

Thursday night's Chiefs vs Packers game was a little bit of a punch to the nose of most Chiefs fans. The Chiefs, usually content to do their best NOT to try in preseason games, not wanting to reveal anything to the opposition, made an unusual decision to attempt to win their final preseason bout with the Packers. They kept their starters in for almost the entire game except for Matt Cassell, Eric Berry, and Tony Moeaki and a few other players who limped off the field with minor and major injuries. We have just learned that Tony Moeaki is out and placed on IR with a torn ACL, making the Chiefs pathetic rumble with the Packers on Thursday a complete and utter disaster.

Why on earth would the Chiefs lay low all preseason, being very careful to avoid injuries, disappoint season ticket holders with boring game play, and then at the very end change their whole preseason mentality and play full force against a team that we could not beat if our lives depended on it. The Packers must have just been on the sidelines shaking their heads, wondering what the hell the Chiefs were doing out there. Even with all of the Chiefs starters in the game, minus the injured players, the Chiefs couldn't do anything against the 3rd and 4th string Packers line ups. We at Kansas City News predicted that Jamaal Charles was never going to live up to the hype that the media brought on this season, and he more than proved that on Thursday night. Charles fumbled the ball and ran miserably for 1 and 2 yards at a time, proving our theory that opposing defenses are keying on him and that he will SEVERELY underperform this season. Hopefully all of you fantasy football dorks were paying attention when we warned you about Charles and didn't go and draft him in the first round!

We were really pulling for Tyler Palko, but he was given ample time to prove his mediocrity on Thursday. This is just not the guy we want leading the team. Anytime he did make a throw that was caught, the receiver had to make some kind of super human effort to barely catch the poorly thrown balls. Rumor has it that the Chiefs will be looking for a veteran QB to sign as the back up for the league's highest paid back up QB Matt Cassell.
at 11:50 AM No comments: 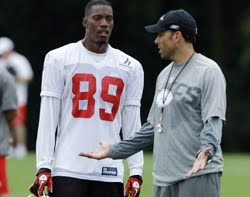