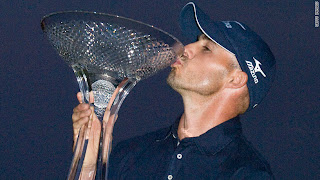 Golf has provided many clutch moments and memorable shots over the years, but none are as big as what Jonathon Byrd recently did at Timberlake. Byrd hit a hole-in-one on the fourth playoff hole of the tournament for the walkoff victory, becomming the first person ever to win a tournament on an ace. Unbelievable.

I can't imagine the feeling of hitting a hole-in-one, but to do so to clinch a tournament is unheard of. The shot earned Byrd over $700,000 for winning the tournament, as well as a two-year exemption to play on the PGA tour. Not a bad upgrade for a guy who was ranked 117th on the money list.

A chip-in or long putt makes for great drama, especially when sealing a tournament. A hole-in-one is so rare though, Byrd's feat will likely never happen again (or at least for a really long time). The odds of making one are slim, and making one in walkoff fashion is incredible. Enjoy your moment in the sun, Jonathon Byrd. Just don't count on it happening again.
at 8:00 AM No comments: