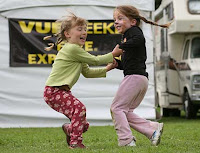 Good neighborhoods in Kansas City are everywhere, but they can be hard to find if you're not from Kansas City.

Another good neighborhood in Kansas City is called Loch Lloyd, or "The Village at Loch Lloyd". It is a private, membership only neighborhood that is located at the southern-most tip of what is considered to be Greater Kansas City. Loch Lloyd has a country club, a golf course, and it's own zip code!

Prairie Village, or "perfect village" as it is affectionately called by it's residents, is THE perfect Kansas City neighborhood to raise kids. Littered with the area's best school districts, young parents and children alike thrive in the neighborhood of Prairie Village. The houses are not extravagant or fabulous but they will cost you plenty. A small little 3 bedroom house will double in value if you pick it up and place it in Prairie Village. Security is great in PV as well, patrol cars will stop anyone who isn't white and driving a mini van or SUV full of soccer kids. One thing to remember about the neighborhood of Prairie Village is this: Don't try to drive through PV after school gets out!

If you have specific questions, please post them as a comment - no sign up required - quick commenting - and we will try to answer your questions quickly.  Thank you!
at 2:31 AM 2 comments: