Jack in the Box back in Kansas City - Grand Opening 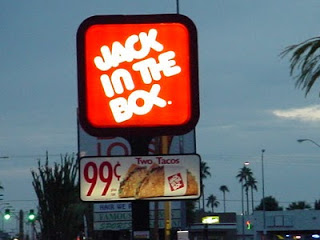 Awwww Yeah!  America's favorite 24 hour grease-a-torium has returned to the Kansas City area.  Jack in the Box, having closed their restaurants in our fair city back in 1980, has opened a new location in a Kansas City ghetto at Prescott Plaza, 211 S. 18th St., in Kansas City, Kansas.  Don't feel left out though, as Jack in the Box also plans to open a location at 103rd and Metcalf in Overland Park, and also somewhere in pseudo-hillbilly Blue Springs.

Jack in the Box really comes in handy after a long night of binge drinking as they are open 24 hours every day and serve breakfast and burgers alike at a slightly upgraded quality than McDonald's or Taco Smell.  While I wouldn't condone eating Jack in the Box every day, it is a welcome franchise in the Kansas City area as a substitute for the other fast food chains that have gotten a little old.

Jack in the Box has the bulk of it's franchises in California (972 locations), and their menu includes burgers, tacos, egg rolls, grilled cheese, and of course the bacon cheddar potato wedges.  Jack in the Box franchises sometimes include local cuisine in their menu, so it's possible that they may attempt to offer some kind of BBQ item on their Kansas City menu.  If it's anything like the McRib, I will continue to go to Jack Stack for my BBQ cravings.  The only other fast food chain that I would like to see return to Kansas City is White Castle - now that's some late night drunk food, baby.
at 6:11 PM 1 comment: