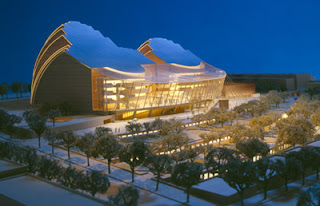 Kauffman Center for The Performing Arts - The New Building in Town

At first glance from I-35 heading into downtown last fall it looked like The Kauffman Center for the Performing Arts was a building that was being torn down, not in the process of being built.  There were strange rusty old steel beams bent inward - and the building looked like it was built in the 20's.

As it turns out, those rusty steel bent beams are going to turn into a state of the art two-venue performing arts center, focused on enriching the lives of Kansas Citians with performances by The Kansas City Symphony, The Lyric Opera, and the enduring Kansas City Ballet, which has always received most of it's support from The Kauffman family.

The Performance Center interior will include two separate halls in The Helzberg Hall and The Muriel Kauffman Hall.  The halls will feature touring acts including Broadway and off-Broadway plays, dance troupes, local Kansas City Entertainment and other touring shows.  The Kauffman Center for the Performing Arts is in an ideal location just blocks away from the Power and Light District, where guests can dine at great Kansas City Restaurants before the show and then grab a drink after the show if they like.  The Kauffman Center for The Performing Arts will contribute to the popularity of a downtown Kansas City that was once thought to be doomed.  It is becoming clearer and clearer that Kansas City is putting themselves on the map as a "real" city.