Royals Season Comes to and End 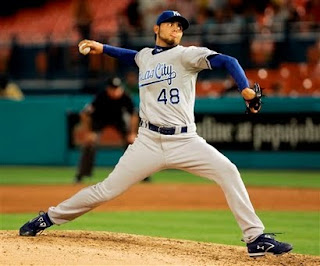 The Kansas City Royals have completed another losing season, leaving only 5 teams in the entire league with worse records than the Royals. Although this season ended on a positive note, with the Royals stringing together several wins and many players stepping up and improving their batting averages and ERAs, it was still just another losing season for a team that hasn't seen a decent win / loss record since 1985. Ah, thank God for the 1985 Royals, George Brett, Willie Wilson, the good old days...
I suppose the elephant in the room that no one wants to talk about is David Glass and the way he refuses to spend money on quality players, and furthermore, the players who emerge from Kansas City as stars are immediately traded away.
The Kansas City Royals are talking a big game right now about how their farm team approach is ready for harvest in 2012, and that they are predicting a playoff appearance by 2013. KANSAS CITY, MO (January 25, 2011) – Baseball America, baseball’s preeminent authority on minor league prospects, has rated the Kansas City Royals farm system as the best in all of baseball in the soon-to-be-released 2011 Prospect Handbook.

"The Royals have one of the deepest and most talented farm systems in recent memory,” said Jim Callis, Executive Editor at Baseball America. “It's unusual to see a system with three stud hitters like Eric Hosmer, Mike Moustakas and Wil Myers, or four quality lefties like John Lamb, Mike Montgomery, Danny Duffy and Chris Dwyer, and the Royals have both. To show how highly we regard the Royals system, we ranked it No. 1 before the Zack Greinke trade, which netted more top prospects. "Seven of the Royals’ top 10 prospects will be in Major League Spring Training camp next month in Surprise, Ariz. The group includes first baseman Eric Hosmer (ranked #1), third baseman Mike Moustakas (#3) and left-handed pitcher John Lamb (#4).

The Royals have been nurturing a great farm team system that is creating future star players, but how do we know that isn't just another way for Glass to make money? At what point will the Royals start trading away their star players, as they have done with every star player we've ever had since the 1990's? I started to get suspicious the minute they renovated Kauffman Stadium last season.

It is no accident that they turned Royals stadium into a giant BAR with the new renovations. Fans can now go to a game and not even watch the game, they can go to one of the many indoor bars, go watch a live band, pretty much anything but pay attention to just the game itself. Glass figures that if all there is to do at a Royals game is actually watch the Royals, then the fans would go home thus spending less money on concessions. Glass has figured out a way to make more money off the ever-losing Royals franchise and I think that they have no intention of EVER spending money on players, thus eliminating us from the big race indefinitely.

But hey, I was lucky enough to actually ATTEND the big games in 1985, so I will always have that. I'm sorry that you young fans will probably never see Kansas City in a celebration of that magnitude in your lifetime. At least we will be able to watch the great players come through Kansas City next season for the All Star Game 2012.