Kauffman Center for the Performing Arts Open for Business 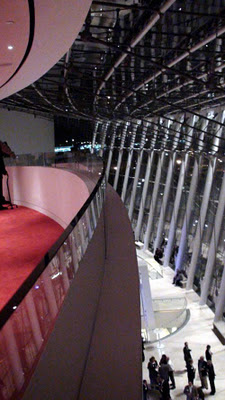 The Kauffman Center for the Performing Arts is open for business and was alive and kicking in Kansas City! Recently we covered an event at the new event center that featured Kansas City's dueling pianos and was sponsored by Bank of Kansas City with entertainment by Bands for Hire Live!

The Kauffman Center for the Performing Arts is an incredible feat of architecture, designed by architect Moshe Safdie, acoustician Yasuhisa Toyota and theater consultant Richard Pilbrow. Kansas City construction fat cats J.E. Dunn Construction Group got the gig to build the center. The total cost of the center was $413 million with another $40 million lumped on the side to operate the center for a period of time until it may or may not support itself financially. The Kauffman Center is a 501 (c)(3) non-profit organization, although I can guarantee that a lot of people are making plenty of money off of it's existence. 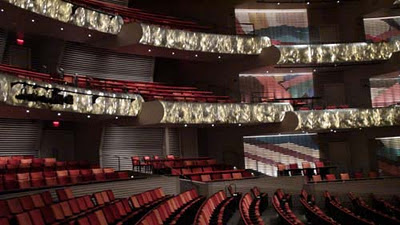 On the particular night that we were there, the Bank of Kansas City had rented out the Kauffman Center and were having their holiday party. The night was very special due to the immense vision of the Kauffman Center as the absolute center of attention. When you rent out the Kauffman Center for an event, you don't need to provide anything more than a bar and some passed hors d'oeuvres to make the evening magical. They went the extra mile at this event, however, with an incredible performance by Kansas City's dueling pianos, who got the entire crowd up on it's feet and singing along and dancing all the way up until the end of the event.

There are two separate theaters within the 7 story Kauffman Center. Both theater rooms were open for viewing on this night until the Kansas City Orchestra closed one of the rooms to have an extended rehearsal. The room that we did get to see was the red velvet seated Muriel Kauffman Theater, which is pictured here. The entire building is absolutely the most impressive building in Kansas City and we hope to visit again soon.

You do not have to sign up to comment! If you have any trouble publishing your comment, try hitting the "Preview" button to publish from there. Thanks!
at 5:19 PM No comments: