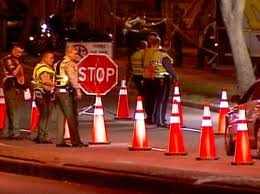 Kansas City Police have been able to make several arrests every time checkpoints are set up, however drunken driving arrests have decreased since the police started announcing the sobriety checkpoints in advance. Hopefully this warning scares more people into finding an alternative way home when they have been drinking.
at 9:18 AM No comments: