Ward Parkway Mall, The Rise and Fall of an Empire

The Rise and Fall of an Empire, the Tale of The Ward Parkway Mall - Kansas City News

If you had spent your Saturday afternoon eating a delicious "loose-meat" greasy hamburger with curly fries at Nu-Way, then headed over to Aladdin's Castle arcade to play a few games of Sinistar or Punch-Out, then topped it all off with a giant cinnamon roll from TJ Cinnamons, odds are that the year was 1985 and you were at the Ward Parkway Mall.


You see kids, in the generation before mass communication wireless devices and social networking digital wastelands of useless information that will surely burn everyone's eyes out by the time they turn 50, there were the days of the shopping mall. The shopping mall was an actual physical realm where kids hung out, eating greasy mall food, going to movies and playing video games at these things we called "arcades". Whether you scraped up some quarters from mom and dad's change bowl, or maybe you got up early and mowed the neighbor's lawn, about $10 would set you up for an entire day of goofing off at the mall. In those days kids would spend their entire childhood at the mall, gradually hanging out more and more as you grew older and then eventually, when you turned 15 years old, a lot of them also went to work at the mall. The girls who worked at Russel Stover would get in trouble for spending too much time talking to boys who would stroll past the store, and if you were really lucky one of your friends was a coin operator at the arcade and they could open up the machines and give you free credits.

The mall was a very intricate social scene you see, and I guess you could say it was our generation's Facebook. The similarities are uncanny; some of your friends were in there, some of them were not (or offline), there were many products being marketed to you from all sides, you could watch movie clips and for the most part you were just wandering around aimlessly killing time. Remarkable similarity.

For many of us who grew up in Kansas City, the most popular mall was The Ward Parkway Mall, named for the boulevard's namesake, Mr. Hugh Ward. The Ward Parkway Mall is now a clump of stores at 8600 Ward Parkway that include a movie theater that no one goes to, a Trader Joe's that EVERYONE goes to, a 24 hour fitness that some of us should go to more often, a Petsmart, a Target, and some knock off woman's clothing stores that are hideous. The story of the Ward Parkway Mall is laden with carnival rides and bank fraud, a story of a place built to it's summit by two brothers who would eventually end up in prison.

The Ward Parkway Mall is Born


The Ward Parkway Mall was built nearn a piece of land that was formerly an amusement park called "Kiddie-Land" and later purchased by Frank Wizarde alias "Whizzo the Clown" and called Whizzoland for it's final years. As amusement parks are extremely expensive to maintain, especially in cities such as Kansas City that have a winter season, the amusement park had to go. In 1959, the Ward Parkway Mall was erected with a handful of department stores and a grocery store.

The Ward Parkway Mall was purchased by the John Kroh, Sr., a successful real estate developer.  John Kroh, Sr. would soon retire and turn his company over to his two sons, John Kroh, Jr. and George Kroh. The Kroh brothers would bask in the light that was the flourishing Kansas City social circle of the 1980's. The 1980's in Kansas City were by far the best years this town has ever seen, when it seemed that everything was lined with gold. The Royals won the World Series, the economy was booming along with George Brett's bat, and the Ward Parkway Mall rose to it's pinnacle of success. An upper middle class shopping mall complete with a Woolf Brothers Fine Clothing store, a J.M. Importers, and the St. Louis based 2-level department store, Stix, Baer and Fuller. With the Kroh brothers at the helm, the mall would expand to open a 2 story movie theater, the largest in Kansas City, and a food court (one of the first food courts) complete with the aforementioned Nu-Way Burger. Throw in Aladdin's Castle Arcade, and you've got the hottest spot in the city to hang out.

Then it happened...after balancing over 100 commercial properties in 13 states, The Kroh Brothers were going bankrupt. At one point the brothers were an estimated $261 million dollars in the hole. They began to perform the illegal maneuver of "kiting" checks. A process by which you have two bank accounts with no money in either, then you write a check to a creditor from bank A, then deposit a check into account A from your (empty) account B. There will be a couple of days before bank A realizes that your deposit from bank B is no good and if the scam works, bank A will cover the 1st check that you wrote to the creditor. In the case of the Kroh Brothers, they did this to the tune of about $7 million dollars at a local UMB bank (back then it was called United Missouri Bank). When the smoke cleared, charges were brought, Chapter 11 Bankruptcy was filed, and some prison time was dealt out. 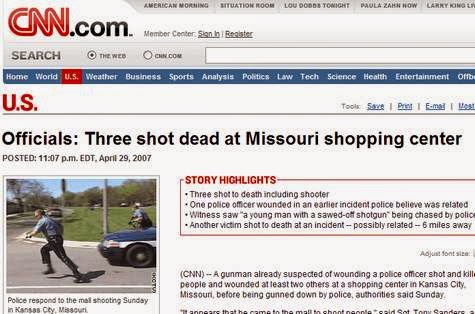 The Ward Parkway Mall made National news on April 29th, 2007 when CNN broke the story of the Ward Parkway Mall Shooting that left 4 people dead.  David Logsdon of Kansas City, Missouri was a former employee of the Ward Parkway Target in 2006 and according to them he "left on his own accord". He then applied and was turned down for a job as a security guard. Trouble arose when Logsdon's elderly neighbor was found dead in her home and Logsdon was spotted at a gas station driving her car. An officer approached him and he shot the officer in the arm. The officer fired back and blew out a window in his car. Logsdon then drove to the Ward Parkway Mall, parked his car, shot from his car at both cars parked along side him and killed two people. He then went inside the mall and continued to shoot people at random. Police shut the mall down and swarmed inside, chasing Logsdon outside into the parking lot where police shot him to death.

David Logsdon was later found to have been partially living in the home of his next door neighbor with her dead body still inside. He had not paid his bills and his water and electricity were shut off. He was using a large plastic container of kitty litter as a toilet police later found in the center of his bathroom. He also used his neighbor's credit card to purchase ammunition for the assault rifle that was used in the shootings. Logsdon's sister told police that her brother was mentally ill and also an alcoholic. Police never officially connected Logsdon with the death of his neighbor although he was a prime suspect.