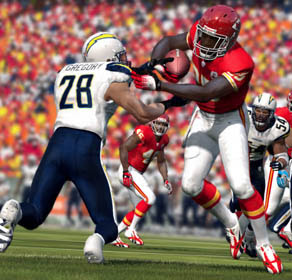 With the release of the country's most popular game, Madden 12 just around the corner (August 30th), EA Sports has released the Madden 12 Chiefs player ratings. As Chiefs fans, it was definitely the consensus that our ratings should be considerably higher after the great season that we had in 2010, and Madden 12 delivered.

The Chiefs are now rated a stately 84 overall as a team and the Madden 12 Chiefs player ratings (marquis players only), are as follows:

Some of the rookies are not on the list yet as we don't know who is actually going to make the cut, but so far we think that the Madden 12 Chiefs player ratings are pretty accurate.

An interesting new feature for Madden 12 will be that players will have week to week personality ups and downs, similar to the old Tecmo Bowl game where sometimes a player would be red hot and sometimes he would be cold. Players ratings are affected by the mood of the player and these moods can change during games. Pretty cool stuff.
at 7:35 PM 1 comment: