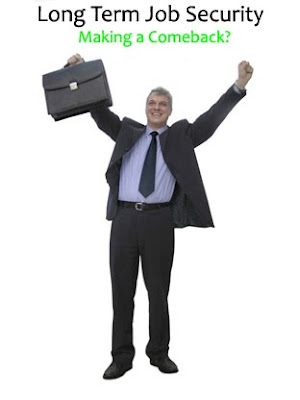 Obama and socialism are being used in the same sentence quite a bit lately. It occurred to me that there could be at least one benefit that emerges from a more socialist America - Long Term Job Security.

Many people are taking offense to Obama's direction towards socialism, but to be honest, we have more freedom from the government and especially the media than we ever have before. The only government imposed lifestyle changes that most of us have seen in the past 10 years are the smoking ban in public places, and mandatory auto insurance.

Diverse Media has caused America to be LESS socialized than prior to 1990.

Now as far as the media is concerned, it has been revolutionized to a point where Americans are not nearly as influenced by the media as in the 20's - 90's. Today there are choices; the internet, blogs, satellite radio, cable television. In the old days you had 4 maybe 5 TV stations to choose from - and that was it. Whatever commercials were on those 4 or 5 TV channels were what Americans saw and that united us in a way. Did everyone love McDonald's? Did everyone love Coca Cola and Pepsi? Hell yes we did, because those were the commercials that were on every channel, every minute of the day. A VERY small handful of companies had total control over the media, and thus over Americans in general. Now that's what I call socialism. Today most of us have over 100 channels to choose from and are exposed to a much broader range of advertisements. Thus we are more free in this day and age than Americans were prior to 1990. We are aware of more companies, products and ideas because of the large variety of media that currently exists. Due to a limited choice of media prior to 1990, America was about as close to socialism as we've ever been. In other words, everyone in America was watching the same shows and the same commercials during those years so it actually had everyone on the "same page" if you will. Why do you think that we haven't had a generation that we could put a real label on since the 80's? Because with the current media structure and more choices for everyone, it is now impossible to get everyone in America in sync. We are as diverse as we have ever been. And that is NOT what I call socialism. Which is good.

In contrast, here is a way that Obama's direction towards socialism can be a good thing:

Some of us may remember a day where the average American worker started working for a company in their early 20's and stayed with the same company until retirement at 65. Think back to your grandparents or parents and look at how long they worked for their respective companies. Most of them worked for the same company for 30 years or more. A few possible reasons for this long term job security was the control that the government and the media had over America during the 20's through about the 90's. As discussed before, Americans were only exposed to a limited amount of media, everyone was on the same page, and therefore it promoted a sense of togetherness, basically because Americans had a lot more in common. This promoted a unified work force and overall employee loyalty. The companies often returned this loyalty by offering long term job security, fair promotions and cost of living raises. Due to long term job security and a unified work force, America was very socialist indeed.

A more socialist America could lead to long term job security. Obama and the democrats are making moves to unify America. This can be viewed as socialism, but it could very well be a positive change. If America can become more unified, as it was prior to 1990, then there could be some positive benefits such as long term job security.
at 11:49 AM No comments: