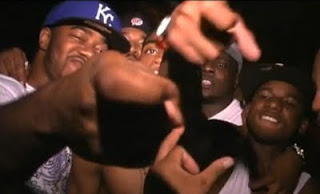 We were just down on the plaza picking up some food from Cafe Brio, and it is official, the plaza has turned almost 50% ghetto. I don't know why the urbanites have crawled out of the hood and descended upon the plaza of all places, but I guess they got tired of terrorizing and trashing up Westport. At any rate, the minority gatherings continue and have caused the city of Kansas City to authorize a curfew of 9pm for anyone under the age of 18.

This should solve most of the problem, as long as they have enough police officers on staff to enforce the new plaza curfew. I'm sure that the response that police will get when they try to question any of the thugs will be something like "man, I ain't got my I.D. on me Homie, shit, I'm 22 muthafucka". I'm not sure how the police are going to enforce the curfew if the ghetto folks don't have any I.D. to prove their age. It is definitely hard to tell how old these people are, there are 17 year olds with full beards, etc. It's probably not that big of a deal to most upper class Kansas Citians as they have long moved to Leawood and enjoy the shopping districts of Town Center Plaza and Park Place. The plaza has officially graduated into the Westport status of completely ghetto and should be avoided at all costs on weekend nights, unless of course you want to end up in the middle of another thug brawl like the one that happened a few months ago in front of the movie theater on the Plaza.

They're doing their best to keep this politically correct on the local news stations, but it's funny that all of the clips and footage they show on TV of the plaza are of blacks wandering around not buying anything, and they even send the token black girl reporters out to cover the story now - pretty funny. In other news, multitudes of cars are being broken into on the plaza all of the sudden and they are mainly stealing car batteries and catalytic converters (for the platinum to make "grills" for their teeth) - I'm sure that the recent rise in thefts don't have anything to do with the new crowd at the plaza - haha.

And before any of you idiots out there that want to pull out your race card and call this a "racist" article, go down to the plaza and look around, or watch the news stations send their black reporters down there - that's not a coincidence, it's not racist if it's TRUE dumb asses.