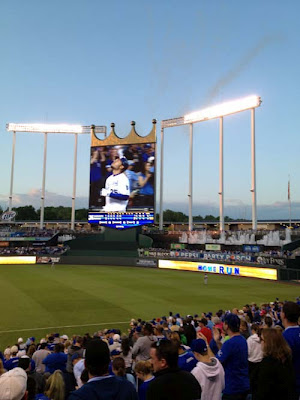 Back to Saturday's game;  this was a game that the Royals could have won.  Take away a few bad coaching decisions, and we could have had this one.

Bad Decision Number 1 - Pulling Mendoza Too Early
The first coaching mistake falls into the "hindsight is 20/20" category and it is hard to fault the management on this one, but even after starting Royals pitcher Luis Mendoza got shelled in the 4th inning, it would have been wise not to panic and pull him out so early in the game.  It is easy to understand why Grand Master Ned would take Mendoza out of the game after allowing 4 runs in one inning, but Teaford and eventually Herrera did nothing to stop the bleeding.  It is conceivable that the Royals would have stood a better chance if they would have left Mendoza in for a few more innings as the Royals offense indeed started making a hasty comeback after he was benched...a comeback that Teaford and Herrera basically threw out the window.  Teaford, the left hander was just throwing up ducks, the Blue Jays just swatted almost everything he threw at them, he had absolutely no skills on Saturday.

Bad Decision Number 2 - What Was Billy Butler Doing?
In the Royals highest scoring inning so far this season, Billy Butler let all of the air out of the tires.  After the nightmare that was the 4th inning, the Royals started a big time rally in the 5th inning.  The inning started off with a double by Alcides Escobar, who was pushed home by Mitch Maier's super hustle triple (Mitch STREAKED around those base pads, son).  Yuniesky Betancourt kept the magic going with a nice little single that brought Maier home, and then the rookie pitcher Drew Hutchinson started to sweat and walked Alex Gordon.  Up comes our 2012 MLB All Star Game candidate Billy Butler, who has been carrying the Royals offense all season...until Saturday.  With Butler at the plate with two men on base, the Royals fans rose to their feet.  Rookie pitcher Drew Hutchinson, who was literally pulled up from the AA roster that week, was obviously freaking out.  He could NOT find the plate and quickly put the pitch count up to 3-0.  Yes, 3-0.  Now what does a professional baseball player do at the plate when the count is 3-0?  That's right kids, he TAKES THE FREAKING NEXT PITCH.  We don't know if old Ned gave Butler the green light to swing on a 3-0 count or whether Billy took matters into his own hands, but with the entire stadium on it's feet and the rookie pitcher about to pee his pants and simultaneously walk the bases loaded, Billy Butler decided to swing the bat.  Clearly the pitch was going to be ball 4, as Butler awkwardly reached for a total squirrel pitch and grounded into an AROUND THE HORN double play.  We just have one question for you Billy, what the hell were you doing?  Butler would go hitless for the game.

The Blue Jays finished the job after that debacle, smacking the Royals up 9-5.  Oh well, the Royals keep losing, but the fans keep coming.  I suppose that is why management trades away all of our good players and keeps the fans dangling by promising them that "we're building our team from our farm team program" - yeah, right.  Attendance for the entire weekend series was around 27,000 each night - so if the people of Kansas City keep spending money to come out to the games no matter how dismal the Royals perform, why change the formula?  The reality is that Royals stadium is just a giant bar - well - it's a giant bar......with a mascot....and a massive cover charge.....and you have to pay for parking......and....oh well, we've got to be the most gullible and sheepish city with an MLB team, we just sit back and take it.