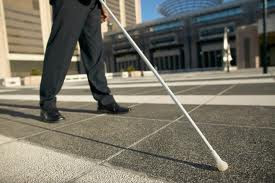 There is low, and then there is really low. Way below that lies where Allen Bennett lies, a man being charged by authorities of robbing and beating his uncle. If you thought that sounded bad, it gets worse: his uncle is legally blind.


Bennett, who looks like the blind beating type, says he did not take part in the beating and has not seen his uncle in months. So we are supposed to believe someone else did this (despite the uncle's testimony)? Committing this horrible action is one thing, but lying about it might even be worse (if that is possible).


Unless it is this guy, the blind must rely on others for help, especially those that are family. I hope that the law gives Allen Bennett a stricter penalty considering that not only did he do something terrible, but he did it to a man who was completly defenseless.