All Star Sunday - Rain in the Forecast - Refunds? 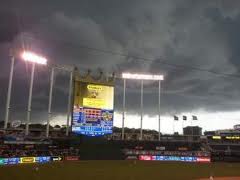 Scheduled for today's All Star Sunday are the Futures Game, the Celebrity Softball Game and a fireworks show. Obviously neither of the two games has any meaning in terms of the 2012 MLB season so we are guessing that the following scenarios will apply:

The Futures Game, scheduled time 4pm, is the game played by the College All Stars, AAA players and other up and comers, and the young players are fired up to perform in front of a sold out Kauffman Stadium in the 2012 MBL All Star Sunday line up. Since there is no lightning at this time, the game would most likely be played in light to medium rain as long as there is no lightning. The Futures Game  We are guessing that if it rains, this game will continue unless there is a major downpour, thunderstorms, or lightning of ANY kind.

The Celebrity Softball Game, scheduled time 7:30pm, is another matter all together. I can't imagine that the MLB will take ANY chances with the celebrities. If there is even a HINT of lightning, they will not be playing this game. There would be too much at stake and the powers that be would never allow celebrities to take the field and risk injury. Basically the same rule will apply to the Celebrity Softball Game as the Futures Game with slightly more precaution involved in the Celebrity Softball Game. If it is a light to medium rain with no lightning, they will most likely play as much of the game as they can. If there is heavy rain, thunderstorms or lightning of ANY kind, they will not play or take the field.

As for the fireworks, they usually will shoot those off in the rain if they can. However it would be hard to say how many people would stick around to see them if the Celebrity Softball Game is cancelled. They will be most likely making announcements from Kauffman Stadium all day if there are to be any schedule changes or cancellations.

As far as any rescheduling or refunds in the case of a rain out on All Star Sunday...probably not, people - sorry.