It turns out that the two women found dead on the trail near Shawnee Park were twins. Police are now ruling this incident as a double suicide and not a murder suicide. The cause for the twins double suicide is not known but it is suspected that financial problems may have been a factor. The names of the twins have not been released.

Two women were found dead along a rural trail in a Johnson Country park yesterday. The women, who were in their 50s, appeared to have died from multiple gunshot wounds to the head. The names of the deceased have not yet been released. 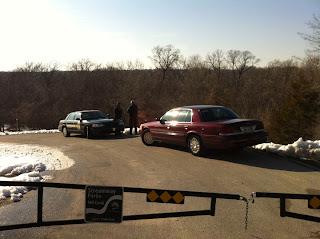 The women were discovered by a passerby in a wooded area in Gary Halley Streamway Park, located near Shawnee Mission Parkway and Barker Road.  Police got the call which reported the discovery of the two dead bodies around 3:07 p.m. yesterday; however it is unknown how long the bodies had been there.


A gun has been recovered from the scene, as well as a white Chrysler PT Cruiser, which authorities believe is connected to the victims. Neighbors in the area reportedly heard a quick succession of shots, indicating that several bullets were fired.


Johnson County police have not classified the case yet, but are considering that the deaths could be the result of a murder-suicide. Due to the possibility of a murder-suicide, police are currently not looking for any suspects, but are interviewing residents close to the area where the bodies were discovered.  Police have also not released any additional information about the two victims, awaiting autopsy results. More information will likely be released today on the victims and any possibly motives.