In a critical game for the Big 12 title race, the Kansas Jayhawks won a double overtime thriller against the Oklahoma State Cowboys, 68-67. The win moves Kansas back into first place, and KU now has its sights set on a ninth consecutive league title after winning the hardest game left on its schedule. 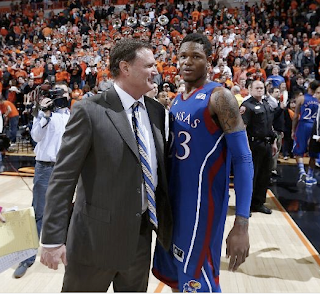 Oklahoma State and Kansas are both top defensive teams, which was on full display last night as both failed to get anything going offensively. Kansas’ Ben McLemore struggled from the floor, but the Jayhawks once again got a strong game from point guard Elijah Johnson, who attacked the rim and took good care of the ball. For the most part, Kansas was carried by Travis Releford (18 points) and Jeff Withey (17 points).

Kansas led for almost the entire second half, and seemed on the verge of putting the game out of reach when Releford made an acrobatic layup to give Kansas a four point lead late in the game. However, Oklahoma State rallied back to force overtime, and forced a second OT when Kansas again let a lead slip away. Both teams stalled on offense, as Johnson fouled out for Kansas and star freshman Marcus Smart fouled out for Oklahoma State. At the end of the game, KU’s Naadir Tharpe got into the lane and hit a short jumper, which gave KU a one point lead. In the final seconds, Oklahoma State’s Markel Brown took a tough jumper that missed, and Releford made an acrobatic save along the sideline to prevent a dead ball and allow the clock to run out. It was a deservingly thrilling finish to the biggest game of the Big 12 season.

Kansas has a favorable home schedule remaining, as it hosts TCU, West Virginia and Texas Tech – the three worst teams in the league. Kansas will face another tough test on Monday when they travel to Ames to take on a good Iowa State team. If the Jayhawks can win that one, it may be nearly impossible for KU to lose out on a ninth consecutive Big 12 title. 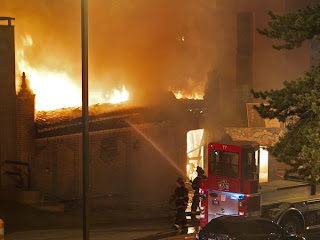 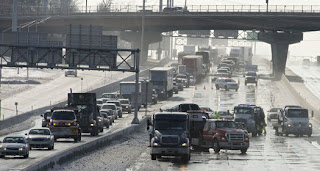 
Due to the approaching storm, grocery stores across the metro were packed yesterday with people prepared to be stuck in their homes for a few days. Kansas City residents have also taken interest in the storm due to the Weather Channel’s recent announcement that they will start naming winter storms this year.

The Kansas Jayhawks may have turned a corner after a disastrous three-game stretch in which they lost to lowly TCU and appeared to be out of the Big 12 title race. After blowing out Kansas State on Monday, KU turned in another impressive performance on Saturday, embarrassing Texas 73-47. 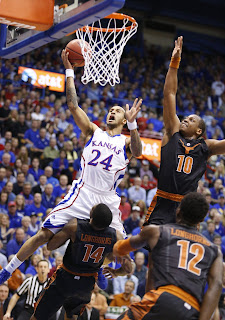 Due to the NBA All-Star break, many former Kansas greats were on hand to see Mario Chalmers get his jersey retired. The current KU squad didn’t disappoint, stifling Texas from the opening jump ball with a great defensive effort led by center Jeff Withey. Withey’s two blocks gave him 265 for his career, breaking Texas’ Chris Mihm’s Big 12 record. Withey also chipped in 15 points, 11 rebounds and four steals. Travis Releford added 15 points in a hot shooting night from beyond the arc, while Ben McLemore added 13 points.
Texas isn’t a good team, but the Longhorns looked downright terrible at times against Kansas nation-leading defense. Texas shot 22 percent from the field and two of 21 from three, while turning the ball over several times in the second half for easy transition baskets for Kansas. McLemore turned one into a 360-degree dunk that wound up being the top play on ESPN’s SportsCenter Saturday night.
Kansas fans have to feel good about how the Jayhawks responded to their three-game losing streak. KU has regained its focus on defense, and the offense finally looks alive. Senior point guard Elijah Johnson has started to playbetter as well, and sophomore Naadir Tharpe has looked impressive in the past couple of games. If the Jayhawks get good production from the point guard position, the team could be primed to make another deep run in the NCAA tournament.
Kansas’ biggest game of the season is coming up, as the Jayhawks travel to Stillwater to face Oklahoma State on Wednesday in a battle for first-place in the Big 12. The Cowboys also won on Saturday, defeating Oklahoma in overtime.
KCMB Kansas City News, official kc news site with breaking stories on The Kansas City Royals, Chiefs, charity events, the 2012 MLB All Star Game, weather, sports, MU, KU, ufo sightings, dui checkpoints, Kansas City neighborhoods, nightlife, concerts, the Sprint Center, the Power and Light District and current Kansas City news articles.
at 9:25 AM No comments: 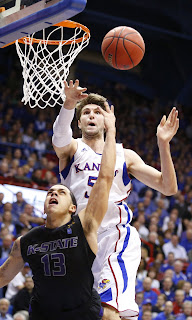