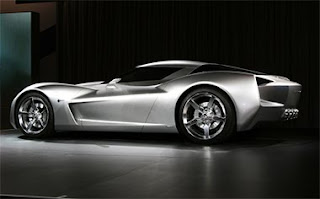 The Kansas City Auto Show is back for 2010 at Bartle Hall on March 5th, 6th, and 7th. The Auto Show will feature live entertainment from The KC All Stars, Liverpool, and Woodstock Review.

Concept cars will include a Corvette (pictured), a Mercedes mini-van/bus, and the all new incredible Jaguar.

The KC All Stars will perform hits from the Motown era on Friday night, March 5th. Liverpool will perform all of your favorite hits from The Beatles on Saturday afternoon and evening, March 6th. Woodstock Flashback will feature music from Woodstock on Sunday afternoon, March 7th. Entertainment brought to The KC Auto Show by Adam Blue Productions, a national entertainment agency that is based in Kansas City.

History
Although there is evidence that an association of dealers existed, and that a Motor Car Show was held in March 1907,the first documented beginning of the Automobile Dealers Association of Greater Kansas City can be traced to the organization's original Articles of Incorporation dated November 11, 1909. Originally known as the Motor Car Trade Association of Kansas City, 15 intricately penned signatures appeared on the Articles.

Automobiles and over-the-road transportation were still in the formative years as the purpose of the Association is described in those original Articles:

* To promote scientific investigation into the problems of the navigation of the air, and to inform the public thereof;
* To inform the public as to the construction and uses of both pleasure and commercial motor cars, and to this end to publish and distribute literature, to conduct and manage shows and exhibitions of motor cars and accessories and air ships of various kinds, and to hold and manage public contests of motor cars and air ships;
* To foster the building and maintenance of good roads, and to disseminate information to the members and to the public concerning roads and tours, and to aid in the passage of wise laws concerning roads and streets and the users of motor cars thereon;
* To bring about friendly and courteous social and business relations among motor car dealers and those connected with allied lines of business in Kansas City.

Needless to say, the Kansas City auto industry has evolved quite a bit over the past 100 years. And though we have removed terminology such as air ships from our charter, we continue to uphold the basic principles of encouraging public interest in new automobiles; and fostering the highest standards of integrity in business practices among new car and truck dealers. Some things never go out of style.

Description
Flashback to the 60s March 3-7 at the Greater Kansas City International Auto Show sponsored and produced by the Automobile Dealers Association of Greater Kansas City. This year we're going retro with the cars, music, fashion and art from the psychedelic decade alongside eight football fields of new cars, trucks, SUV's, crossovers, vans, and hybrids. Don't miss your one chance this year to see hundreds of vehicles from the past, the present and the future... all under one roof.

Watch the Kansas City Star for "Buy One Get One Free" special offers.

Sponsor: The 2010 Kansas City Auto Show is sponsored by the Automobile Dealers Association of Greater Kansas City under the direction of Auto Show Chairman John McCarthy of McCarthy Auto Group. Additional sponsor: The Kansas City Star and cars.com.
at 5:40 PM

I love this car really it look much cute and very attractive.The photo itself is so brilliant how will be the car I am thinking that.. I really like the front lower facia and rims.Sweet looking ride.I can't wait to test drive it!All the features of the car are very good..
Amazing car.Survival Kits......

This year's auto show was the best ever, the live music was a great touch - I was able to sit and enjoy the bands while my husband and son looked at all of the cars :)

Thank you for the info about the auto show. It's so sad that I missed it though. When is the next one?