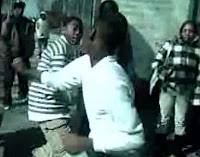 First and foremost in case you have not heard there is crime everywhere not just where you call the "ghetto." Its everywhere, and not just caucasions all nationalities spend money on the plaza and elsewhere. NO its not fair that people have to be subjected to this nonsense no matter what race. Nor is it fair that our Representatives have to be subjected to racial hatred and violence. I guess in your eyes they deserve it because if you're colored you should be limited to the ghetto. Well today's flashing news, we're everywhere, your kids, nephews and nieces are listening to R&B and loving it, you're watching blacks beat caucasions at their dominant sports, etc! Get over it, no matter what race or nationality everyone deserves to be treated the same! And quit racial profiling individuals because they are driving a much nicer car than yo, maybe beneath what you see they are much more educated than you are and have a better job.

Just watch the video again and you realise who majority of these young folks were. Black, young troublemakers. I its incidences like this that create tension between races and prejudicial attitudes. Hey, I am a young black woman but the first thing that came to my mind when I heard this brawl was " here they go again!".You can grow up in the hood and not act hood. Its a damn shame.

I think this is a good post, it is not racist to describe something that is obvious. Just watch the video and let me know what race they are. Enough said - good post - keep it honest. The news and the radio avoided the truth because they are afraid of offending anyone and that is not telling the whole story which is supposed to be their job!

Why do you think they had to install such a strict dress code at the Power and Light district? So these idiots wouldn't try to show up with their stupid shorts hanging around their ankles and fake gold chains and shoot people. Good write up!

Thank you! Like I said I am a young black woman who faces reality and hates to be judged on the actions of others that yes understandbly "not all" have social and economic issues in their lives.
I understand the vicious cycle of life!

However,
I do not and will not accept behavior that further puts the rest of us hard working folks down in the pyramid of society and drag other folks with them because of circumstance.

Everybody can point fingers at the system, the economy, the racial prejudice,the social networks, the single parent families, the school district issues however I believe the NUMBERS are appalling and a complex reflection of things going bad. If it was an isolated incident with 20 or so kids I would not be as worried as I am now.

In addition to the suspicion that this weekend there will be a similarly atrocious and unnecessary act, makes me face the fears I have always and shared with my husband about being around "what i know" are "them troublemakers". Do I want to be around the Plaza this weekend. No!

I am thanking God that I wasn't there yet I was close by in the Westport area that had its own little issues last weekend but I survived. As for P&L, I have never experienced what some folks have experienced there, however, in all HONESTY, and not knowing what the issue has been at P&L, I would be cautious as to who I let in. FOR PITS SAKE, other metropolitan cities in the U.S have STRICT dress codes to elimnate folks they do not want. e.g. ATLANTA - large black population, you want to go to a good club, you have to dress the part! Its not rocket science!


I love my people and all other races provided we get along.

I'm sure that most of the black community spends more money on cell phones, ring tones, gold chains and rims then they do on healthy food for their children, bills, and insurance. Notice how when you are in the ghetto everyone has "temporary tags" - that's because they spent all of their money on their cell phone and the rims on their car. They're trying to be like their idols, the famous blacks, and they don't understand that they will never be able to afford those items.

Once again, we have to blame the media (B.E.T) for the ignorance of the black youth.

Or another way to put it would be to say that rap music videos have given the black youth the wrong idea of what success really means. You can have the latest cell phone, gold chains and rims on your car as long as you have a solid job and you are paying all of your other bills, etc.

Just like any race of people, you have to work hard to get what you want and you must maintain a good balance in your life to be happy -

this is very funny that whoever you people are can honestly say that it is only the black community. ALL famous people flaunt thier riches and exploit women. i see it every day on TMZ! what is the relevance of you talking about BET being a bad influence...what about Jackass that had people (WHITE PEOPLE) doing stupid things that hurt themselves?? and how dare you have any mention of black people spending more money on things that they want instead of thier children... this is not true in all cases and i am highly offended by all of the things that you all have said trough this thread. yes... there are messed up people in the world, but the races have nothing to do with it. i've see white riots that have broken out as well. the real issue is the fact that the parents: regardless of race, let these children run the streets like that. you CANNOT blame the children when the parents know the curfew! i grew up seeing the same things: watching the same BET and seeing the same things they see in the streets, but i am also a undergrad working on a BA on a scholarship... the things that you do are by choice... no matter the race, so the stereotypes need to stop!

****PLEASE REMEMBER TO SPAY AND NEUTER YOUR PETS**** - this will help keep this black-mob-mentality incident from happening in the future.

I agree that people on here are being ignorant and racist the last person made a good point it is the choices you live with sure it can be blamed on the media and society and how the economy has hurt everyone but we aren't to blame. The only way to stop the fights and the crime is find other means to interact and work on better goals as an community. Everyone has become more materialistic it is in our culture and it won't change until the idea of owning some much rich, and nice things are worth less in life. I really believe that as long as we can make things useful and create things in life for ourselves it is a greater reward in life then owning a lot of stuff.

Please place this statement in all of your feeble minds:

Simply mentioning the RACE of a group of people is NOT racist. I can say blacks, mexicans, jews all I want when referring to them.

hey all of you white brothers stop complaining all you are doing is clearing your chest, go get your ccw.

This article is totally racist.