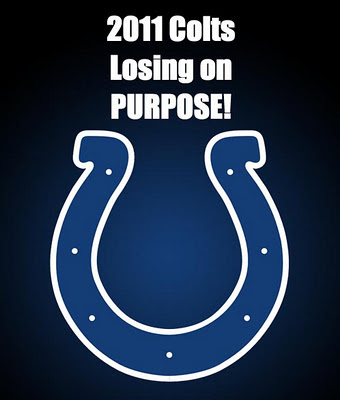 Is there any doubt that the Indianapolis Colts are losing on purpose so that they can get the first round draft pick? Why is no one calling them out on this in the NFL media? The owner, the head coach, and a few other key members of the Colts management are throwing games on purpose. Obviously the players could not be "in" on the plan because they could not be asked to make mistakes intentionally, as it would hurt their statistics and future value. But here at Kansas City News, we're going to tell you how an NFL team throws games without letting the players in on it:

Play calling. It's as simple as that - play calling. The Colts are calling plays that will guarantee failure. Running plays up the middle that have absolutely no chance of gaining yards are the Colts staple plays this season. Every once in awhile a running back will break out of the pack, but believe me, this is NOT by design. The running back simply gets a break and takes advantage. Watch the Indianapolis Colts play calling and notice these hopeless runs into traffic. As for the passing, you might notice that Reggie Wayne has only been targeted less than 10 times in over 3 games. That is very interesting considering that he used to be Peyton Manning's number 1 or number 2 look on any passing play last season. Curtis Painter is only given the green light to throw up a few long passes, but mostly he is called upon by his coach to throw little dink and dunk passes to receivers who are running short routes.

Other ways the Indianapolis Colts are losing on purpose for the first round draft pick include defensive calling. The defense of the Colts are not blitzing. In previous seasons, opposing teams would be treated with the one - two punch pass rush of Robert Mathis and Dwight Freeney.
Not the case this season, since star quarterback Peyton Manning went out for the season or possibly for good, the Colts defense are playing a very generic 3-4 defense and are simply not stopping their opponents.

The Colts are not necessarily losing on purpose to get upcoming quarterback Andrew Luck, they are just losing on purpose to get the first pick, which they may choose to trade to another team for more draft picks or to use as leverage to another means. The Colts are playing dirty pool and if you can't see that, then you probably can't see the nose on your face either.

Uh oh, it recently came to out attention that some people feel that the owners and coaches would not put their players in a position that my result in injuries. Yeah, right, do you really think that the Indianapolis Colts would let any of their star players get injured? And do you think that they care about any non-star players that get injured - uh, no. Dismiss that thought immediately, they are losing on purpose, period.
at 12:37 PM

Maybe its time the NFL does what the NBA does and have a lottery for 1st pick.

Of course they're dropping games on purpose - they want the first round draft pick - not just for Andrew Luck necessarily but for the power and they will hold when have it in their hands - teams will be bending over backwards to trade up for that pick. Suck for Luck is for real, and no where more prevalent than in Indianapolis. The Colts are cheating bastards and the NFL media is ignoring it completely - the perfect crime :)

It's time for an NFL Draft lottery

This article is right on the money. Another opinion here

Oh my gosh! I think that we just got our first "kudos" on this site. Wow, thank you so much - we finally got one right :)

The Colts are losing on purpose, there is no doubt left on anyone's mind. Even the doubters have to bow down now - sorry guys.

As a colts fan for decades I have to say this article has absolutely no merit. It would be like saying a blog site posting an article like this in order to get listed first on Google search for the colts losing on purpose. Unfortunately the colts just suck without manning, the defense has always been horrible. With most of our wins coming from Manning's ability to post outrages touchdown numbers. I cant see how losing so bad without him is so unbelievable. Face it the colts are just that bad, we have the worst coach in the league, no defense, our two defensive ends cant play more then two downs in a row. Special teams has always been a freaking joke. Sounds to me like the other teams that may have wanted to tank, quit trying to tank upon realizing the colts are just that horrible.
As for painter not getting the green light to go for it, he isn't that good of a qb. You dont let bad qbs go deep that often, at least I cant think of any that do. And the whole there not targeting wayne is nonsense. Every qb will find there favorite receiver, unfortunately it isn't always the best receiver. Sounds to me like a Kansas City blog has nothing better to do then make up stories, since its impossible to prove in any way.

Colts Fans Might Not Suck A Dick, But They'll Sure Hold One in Their Mouth... said...

The Colts are definitely losing on purpose for the first round draft pick. Wake up! They could have easily beat the Panthers today, but they did the same thing they always do to lose; pick lame running plays that garner 2-3 yards (unless the running back gets lucky and breaks the play like Brown's TD today) - but other than that, they are calling the worst plays that they can on offense and on defense in order to get that first round pick. Now keep in mind, they are not just looking at getting Andrew Luck, they just want the power that the first pick will garner for them. Pull your head out of your ass Colts fan above - you are wearing blinders. And who cares anyway? You're getting away with it, so why are you guys whining? I guess it's because you live in a town that is basically known for NOTHING except the Colts. Fuck off, it's fun watching you guys lose anyway.

Wow real classy response there, what would the world do without such knowledgeable fans. Too bad this happens every year there's a quality first round qb. Whatever teams losing the worst, MUST be losing on purpose. And if you knew anything you surely understand that if we are sucking for luck then why the hell would we pass him up. As for play calling, I'd say good ol' coach Caldwell couldn't out coach a high school team.He's incapable of winning without Manning. But thanks for your two cents dumb fuck.

Ah, denial. It is the easiest way to feel vindicated. Sorry Colts fans, your organization is corrupt, and they are definitely throwing all of their games. The first step to get out of denial is to admit that you have a problem, haha :)

What's really funny is watching horse face Peyton on the sidelines with that stupid little ear piece acting like he's concerned about the game. He only acts upset when he knows that the camera is on him, then he just goes back to relaxing and waiting for the sweet rewards of next season. Another thing, why would the Colts come out in the BEGINNING of the season and publicly announce that head coach Caldwell's job is in NO WAY in jeopardy? Now that's a scam if I've ever heard of one. Who would announce that their coach's job is secure at the beginning of the season? Losing on purpose, it was the plan all along, get over it.

Agreed, as a Miami Dolphins fan, you can definitely see that the Colts Org is not concerned with winning. I would go so far to say that the Colts Org is bent on losing. There has NEVER been a winningless team in the NFL. It's the worst possible title to hold in the League. There can only be one reason for Colts Org not to make major personell changes to guarantee not to be the only winless team in NFL history. They want to lose out to guarantee first draft picks. I am even convinced that the players have been brainwashed, as they seem to be on board. Payton Manning is the worst offender in NFL history to manipulate a team around his success and personal contract. The only good thing about this season is that it exposed Payton for being the self centered ball hog he has always been. Too bad a number one pick can absolve the Colts Org from being held accountable for his selfish actions.

There is absolutely NO DOUBT that the Colts are losing on purpose. Colts fans are just in denial. Wake up and smell your stinky organization and your scamming ways. Don't worry, it will backfire on you and the Colts will be a losing team for years and YEARS to come.

Idiots. I love you sweet guys. I bet you called home to your girlfriends, your kids, whoever, and told them of your big theory. Yea, you guys guessed it and none of us had a clue!! DUHH We know this!! Manning is a winner, that is why they made him get surgery and are keeping him out. Manning would never lay down and the staff knows it, so he was kept out. Also, the NFL probably made a backroom deal with Irsay so we would not be in the Super Bowl when it was in our town. Im sure Irsay agreed so we'd get the Bowl. Peyton wouldn't do that.It is much like the NBA, we were cheated by the higher ups because the Knicks were supposed to be in the big show, not the team from Indy (back when Spike lee's punk but taunted Reggie Miller in the 90's, and we were cheated out of the Championship repeatedly). Anyway, no big news here, and as far as towns being known for anything, I think I saw K.C. on Gangland once, but other than that, Who are you? Nobody. Check out the Indy 500, the NCAA, well it goes on and on outside of sports. However, your team is terrible and they are trying!! Thats the Chiefs, not even good enough to be the perennial gate keepers to the big game. We are great and will be again; what have you done?

I was bloging about this two months ago and yes they were throwing games on purpose.
They would have lost afew games, but does anyone believe they got that bad that quick?
If so, then all they ever had was Manning.Sure they won afew to make it look good, but they knew when to lose and when not to. Did you notice that at the end of the season it was in their hands to win or lose and get the next so called Payton Manning. The League should be ashamed to let this sort of thing go on.

So many errors here. A completely and utterly biased, opinionated piece of crap article disguising itself as sports journalism. This is baseless, on so many levels.

Notice the above person didn't point any "errors" out. Sounds like someone has a shitty job and an ugly girlfriend and is taking it out on the comment boards. Poor kid.

Everyone knows the Colts lost on purpose to get Luck in the draft - wake up.