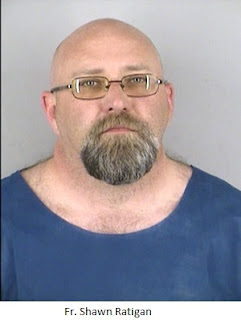 The Bishop of the Kansas City-St Joseph Diocese admitted on Friday that he should have done more after learning about Father Shawn Ratigan's inappropriate behavior. Last week, Ratigan was charged with possession of Child Pornography.

Since the priest's arrest, new details have emerged that inappropriate conduct was noted more than a year ago by the principal of St Patrick's School in Kansas City, North of the river. In a letter to the diocese, the Principal noted that teachers and parents had some concerns about the Father being a little too touchy, feely with the children, as well as a large number of pictures he was taking.

That letter found it's way to the desk of Monsignor Robert Murphy in May of last year. The Monsignor spoke with Bishop Finn about the letter, but the Bishop never asked to see the report. Monsignor Murphy spoke with Father Ratigan about his behavior, and it was left at that.

Bishop Finn now regrets that he did not take more action and vows to change policies for future possible events. All this rings hollow to catholics who have seen and heard this song and dance before. Back in 2008 while announcing a Church payout to the tune of $10 million to victims of past abuse in the Kansas City area, the Bishop apologised and vowed to put into place programs that would see this never happen again. How'd that work out for ya, Bishop.

The Catholic Church is a joke. I can't understand how anyone can step into a Catholic Church, let alone give them money. But I do understand them a little more. They are so opposed to abortion because it would rob them of one more child they could molest.
at 10:14 AM

Bishop Finn should go to JAIL for reckless child endangerment and aiding and abetting a known pedophile, along with Vicar Murphy and anyone else that knew.

Catholics are much too soft on child rape. Law enforcement has to take over and throw the Bishop and all other complicit managers in jail.

We can't expect the Catholic church to rise to the standards of Chucky Cheese, but they should at least have to follow the basic laws of humanity and the laws of the land.

Hey,let's not forget that statistically, catholic priests are in the extreme bottom percentile of abusers, most of which are secular schoolteachers who are not religious at all. Watch yourself on your fantasy-based hate, please and educate yourselves. Thank you.