Phil Mickelson Wins The Masters for the 3rd Time at Augusta 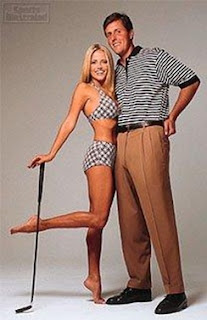 Phil Mickelson finishes with a 16 under for the round, a 4th place overall in Masters Tournament history. Phil did not lead the Masters after 18 holes, after 36 holes, or after 54 holes but wins the Masters today regardless.

Phil had an incredible shot from out of the woods on hole 13 which landed about 5 feet from the cup. He would birdie 13 and move on. Phil's wife Amy Mickelson has been undergoing treatments for breast cancer and laid down in the hotel room during much of The Masters Tournament. She and their three children were present for the final round today as Phil and Amy had an emotional embrace at the end of the 18th hole celebrating Phil's victory.

Tiger Woods was supposed to be the headline in The Masters tournament as he returned from a long hiatus from the game of golf after his public affairs sent him to the top of every news story in the country. Tiger did not perform up to his own standards this week but he still put up a 4th place showing of 11 under par.

But it was Phil Mickelson and his wife Amy at the finish of the 18th hole that made the story today; a very emotional win for an overjoyed Phil Mickelson.

Congratulations to one of the only left handed golfers on the tour, Phil Mickelson.
at 6:38 PM

Phil Mickelson's management team have revealed how close he came to giving up golf last year because of arthritis.

Mickelson was diagnosed with the debilitating illness last May but played down its seriousness when he spoke about it three months later.

Now, on the eve of the defence of his Masters title this week, his manager Steve Loy has spoken of how worried those in the inner circle were for the leftie's future.

'It was a lot more serious than people know,' he told the Augusta Chronicle.

'It could have been a lot more threatening to his career and his normal health than people know. We're blessed to have the best medical supervision and treatment available. It's 100 per cent better, but he was not Phil Mickelson from three weeks before the US Open in June until the Ryder Cup.'

Mickelson's diagnosis came at a time when wife Amy was fighting against breast cancer. 'We always expected to grow old together, just not at 38 and 40,' said Amy.

Loy's revelation explains Mickelson's poor form over the past year, which in turn had everyone writing off his chances of claiming a fourth green jacket in eight editions.

Well, until a stunning Saturday in Texas that is, when Mickelson came from nowhere at the halfway stage of the Houston Open to be tied for the lead going into the final round yesterday, thanks to a brilliant third-round 63.

There's probably two golfers in the world who could win an event the week before Augusta and hope to win the Masters as well - and the other, Tiger Woods, never takes the chance.

This round not only added up to a wake-up call never to dismiss Mickelson's chances round here, where he has finished outside the top 10 only once in his last 12 appearances.

It also proved a wake-up call to the bookmakers, who instantly made him favourite for a successful Masters defence.

What a performance this was, a timely epistle that when he's on form there's really only Woods at his best who can live with him.

By his side was Lee Westwood, who seems to bring out the best in the American, given what happened at Augusta last year.

Westwood's caddie, Billy Foster, believes Mickelson has a better short game than Seve Ballesteros, and he should know given that he once carried the bag for the Spanish wizard.

At the par-four sixth hole there was a prime example, where Mickelson, in trouble off the tee, had an impossible-looking chip for his fourth shot. Anyone else, therefore, and it was a double bogey.

Mickelson bumped a wedge into the face of the slope and watched the ball trickle down gently 10 feet into the hole.

Foster was so impressed he instantly bent down in homage. So to yesterday's play, where Mickelson was not having things all his own way.

At the halfway stage, he was one shot behind the doughty American Scott Verplank, who had played the front nine in 33 shots to Mickelson's 34.

Padraig Harrington had begun four behind and got the fast start he needed to move into contention, birdieing two of his first five holes.

But at the seventh there was an ugly three putt and, when it was followed by a succession of six pars, it left the Irishman six off the pace with holes running out rapidly.

Westwood ended his pre-Masters tournament preparations with a 68 that sounded good in theory but left him furious in practice.

After a poor Saturday, Westwood was back to his best from tee to green but his putting has plagued him all year, and so it continued.

'My putting has been atrocious all week and here I managed to turn what should have been a 61 or 62 into a 68. I missed five putts under 10 feet, and that really ought not to happen on greens as pure as these,' he said.

Meanwhile, Woods prompted a flurry of gossip when he turned up early at Augusta without caddie Steve Williams.

'I've only gone and fired him,' he said, before breaking into the broadest smile.

He looks a lot more relaxed than last year, when he was making his comeback after all those tawdry revelations.

On the European Tour, Englishman David Horsey claimed the Hassan Trophy in Morocco following a play-off against Welshman Rhys Davis and Jaco Van Zyl from South Africa after holing in one at the second in regulation play.