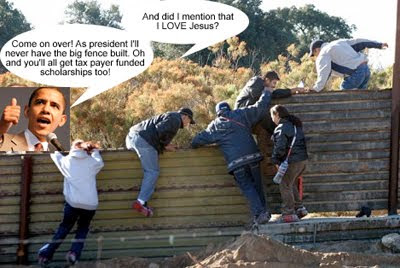 Arizona is the main gateway for organized Mexican criminals to enter the United States' main population.  This is a fact, not an opinion.  Arizona governor Jan Brewer recognized this problem and took action by passing Arizona law SB1070 making it a state crime to be in the United States illegally.  The arguments, protests and boycotts that surround this new law are ridiculous as the law passed by a whopping 70%.  I'm sorry, but that law isn't going anywhere folks.  In fact, there will probably be several other states that follow suit very soon.

Socialist and increasingly racist president Obama has spoken out against the law, but we all know that this is only to protect his share of the minority vote - which is the only reason he is in office in the first place.

The most official of the protests came in the form of a lawsuit filed by 15-year Tucson police veteran Martin Escobar.  I can't imagine why a police officer with the last name "Escobar" would oppose SB1070 - haha!  What a joke.  He is obviously trying to protect someone, presumably a few aquaintences of his or his family that are in fact illegal Mexican aliens.  If I were in Arizona law enforcement, I would start looking into Escobar's family and friends for ties to illegal aliens.

Mexicans also gathered outside of the Chicago Cubs stadium to protest when The Arizona Diamondbacks were in town, urging the baseball game patrons to "boycott" Arizona.  They had rented a little crappy plane to fly around the stadium with a banner - probably the same plane that they use to transport illegal Mexicans from the border.

There is a much larger problem stemming from the Mexicans crawling over our American border.  They do not respect American values, they do not respect Americans, and they CERTAINLY do not respect the English language.  Press 1 for English - fuck that.  Mexicans in America are making NO effort to learn our language and that is just plain disrespectful.  They keep to themselves, do sneaky little petty crimes, and act like they don't speak English at all when they are being questioned by police.  Thankfully, they are not exactly "terrorizing" us as a nation, but who knows what might be next if they are shown that they can get away with anything they want and that our own president will protect them.  They may gain some confidence and start taking their crime intensity up a notch.  Remember the huge Mexican protest parades that blocked traffic last year?

Watch this hilarious video which shows an illegal Mexican who admits to "doing little things" to illegally go to school and live in America - he seems to be proud of this??  What an idiot.

Whether or not Missouri or Kansas will follow Arizona and pass the SB1070 law remains to be seen, if they do they should start in Olathe, Kansas.

In conclusion, I don't understand why the Mexicans even want to come over here.  Mexico is beautiful - many Americans vacation there - the weather is tropical and the taxes and cost of living are low.  America is literally falling apart economically, hopefully it will not look so attractive to Mexicans as things get worse over here - why do they want to leave so bad anyway?  Did they ever think of staying and fixing up their own country?  Now THAT'S a good point - stay and fix your own mess.

I hope that every American, regardless of where he lives, will stop and examine his conscience about this and other related incidents. This Nation was founded by men of many nations and backgrounds. It was founded on the principle that all men are created equal, and that the rights of every man are diminished when the rights of one man are threatened. All of us ought to have the right to be treated as he would wish to be treated, as one would wish his children to be treated, but this is not the case.

Today we are committed to a worldwide struggle to promote and protect the rights of all who wish to be free. In a time of domestic crisis men of good will and generosity should be able to unite regardless of party or politics and do what is right, not what is just popular with the majority. Some men comprehend discrimination by never have experiencing it in their lives, but the majority will only understand after it happens to them.

Nice comments, although you are missing the point that these Mexicans are here ILLEGALLY - did you hear me? ILLEGALLY.

By the way - the Sombrero ad is a great touch!

Sorry to burst the bubble here but the author of this post needs to improve their reading skills — the Latina Lista blog did not say there wasn't anything wrong with SB 1070. The "authors" referred to in the line quoted were the authors of the critical commentary.

If the blog post at Latina Lista was read in its entirety that would have been very apparent. But of course that's a moot point if you just want to bend over backwards to find support for your own argument.

You are correct Marisa, we did not understand the sentence and misquoted you guys - we have corrected this and apologize. Thank you for bringing this to our attention.