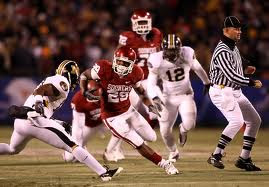 The Big 12 media has released its prediction for the upcoming football season, predicting Nebraska to win the North and Oklahoma to win the South. The prediction comes before the Big 12 Media days, which will run Monday through Wednesday next week.
Missouri was picked to finish second in the North, followed by Kansas State, Kansas, Colorado and Iowa State. A large factor in predicting the North is the teams' South schedule: teams that draw Texas and Oklahoma often are predicted to finish lower in the league due to what is perceived to be an automatic loss.
While Oklahoma was favored to win the South, last season's national runner-up Texas trailed the Sooners by only a few votes. Texas A&M, Texas Tech, Oklahoma State and Baylor round up the rest of the division. As usual, the South could be decided when the Sooners and Longhorns collide in the Red River Rivalry.
at 7:47 PM