Colorado Should Leave the Big 12 ASAP 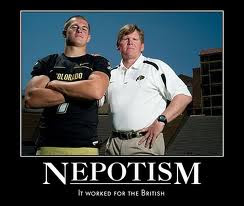 New reports indicate that Colorado is planning on staying in the Big 12 until the 2012 season, despite Nebraska's plans to leave after this upcomming season. The Buffalos indicated that financial reasons are behind the school's decision to stay put for a few seasons.
Only problem is, Colorado still plans on leaving the Big 12 for the Pac 10 once it gets its financial situation dealt with. The same school that can't afford to fire lame-duck coach Dan Hawkins because the buy-out is too high. My question is: why should the Big 12 let Colorado hang around? Why should it bail out a school who is leaving for "greener" pastures in the Pac 10. Especially a team that constantly finishes at the bottom of the league in the revenue sports.
Think about it this way. If you had a girlfriend who decided to leave you for another man, would you let her stay in your house until her boyfriend was available? This is what Colorado wants to do. Stay in the Big 12 until it is financially stable, then jump to the Pac 10. The Big 12 doesn't owe Colorado anything. Another issue is scheduling; when Nebraska leaves the Big 12 will be at 11 teams. With ten teams, the league can have an even schedule in football and basketball. The Big 12 shouldn't complicate its schedule and prolong the inevitable by letting Colorado hang around an extra year.
The Buffs decided to leave the Big 12 for another conference. The Big 12 should move on and carry on without Colorado after this upcomming season, whether the Buffalos want to or not.
Comments?
at 10:15 PM