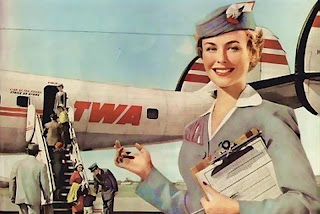 The long history of American Airlines' overhaul base in Kansas City is over. The last day of operations was Friday September 24th. Aircraft overhaul operations date back to 1956 in Kansas City. Then TWA had a facility at Kansas City's downtown airport. Operations grew to it's height in the early 70's at the newly constructed Kansas City International Airport. Kansas City became a hub for TWA at this time and the overhaul base employed nearly 6,000 people. TWA was the largest private employer in the city. Another casualty in the United States struggling airline industry as operations are consolidated into their Oklahoma Facility.
Even with all the problems the airlines have had since the 80's, the TWA overhaul base was a large employer. At the time American bought TWA in 2001, there were still over 2000 employees at the KCI facility. The September 11, 2001 attacks were the beginning of the end. Though the city and American had hoped to keep the base alive, two years ago it was announced that most operations would move to their Tulsa, OK base effective cutting the Kansas City facility's work force in half. Last October the word would come of yesterday's closure. It seemed inevitable with declining revenues for all airlines. About half of the remaining workers at the facility will retire, the other half have been transferred to other American Facilities.
The challenge now is for Kansas City to generate revenue from the massive building that sits mostly idle now that American is gone. Last month, Frontier Airlines began using some of the space for its maintenance operations, and a small locally based aircraft parts company is hoping to expand and use a significant portion of the space.
at 7:45 AM