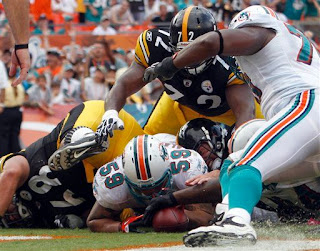 What exactly happened here? This seems to be the general outlook of football fans regarding Ben Roethlisberger's "touchdown" that helped the Steelers edge the Miami Dolphins, 23-22. The controversial call has led to universal criticism against the refs and will be talked about for weeks.

In case you missed the thousands of replays of the play, here is what happened: Big Ben lunged for paydirt during a QB sneak, and fumbled the ball. The refs initially ruled it a touchdown, and then correctly overturned their call when Miami challenged. Only problem is, the refs failed to see who recovered the fumble. Here is referee Gene Steratore's explanation:

"After review it has been determined that prior to the ball crossing the goal line, the runner did lose possession of the ball. However, by rule in replay, two aspects of this play must be available to be viewed. Not only did we have to view the fumble being a fumble, we also have to have clear evidence of the team recovering the ball. After review, we do not have clear evidence of the defense recovering the fumble, therefore Pittsburgh will have the ball, fourth and goal at the half-yard line. Miami will not be charged with a timeout and the clock will start on the ready for play."

Video evidence shows Miami emerged from the pile with the football. Roethlisberger claims he originally got the ball, then the ref told him to let go of it. No matter who is right, in the end the Dolphins are angry, and the refs missed the call.
at 2:00 PM