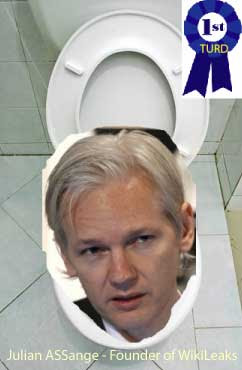 Juvenile men will understand the desire to take a picture of a turd in a toilet and show it to their buddies or at least when they deposit something famous in the toilet bowl they insist every pal they have sees it before it is flushed. Well Julian Assange, the man behind WikiLeaks, is the turd of all turds in the toilet bowl hall of fame and it is no coincidence that his last name starts with "Ass". He is the lowest scumbag to ever live and if ever there was a justified use for a sniper rifle, this guy is it.

On November 28th, 2010 Julian Assange started leaking 251,287 of the United States government's most sensitive documents dating back to 1966. The trust we have built with nations has been damaged, "personal" comments about leaders have been outed, and people who exist anonymously or in the shadows, have once again been brought out in the open where their very lives will be in jeopardy.

There is always that guy who runs his mouth off over and over and over and then eventually one day someone kicks his azz and sets him straight. This never happened to Julian Assange. I think Mr. ASSange, the snooty little prick, should win the world title for biggest azz who hasn't been beaten to within an inch of his life by someone putting him in his place...ever. Maybe had someone taught him right from wrong, he would have had a conscience and stopped himself from the harm, embarrassment, and danger he has brought to America and the individuals protecting it.