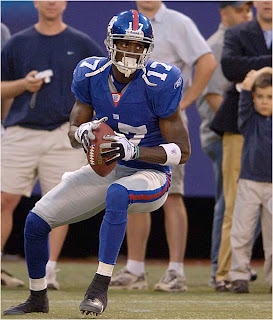 With the NFL draft only two months away, many Chiefs fans have voiced that the club needs to find an impact WR to go with pro bowler Dwayne Bowe. The Chiefs struggled mightily to find a complement to Bowe last year, which hurt the team's passing attack down the stretch. Bowe's breakout season means more teams will be keying on the young wideout, which means finding another quality receiver or two a priority.
However, the Chiefs should be weary of drafting a wide receiver in the first round. Often, wide receivers are a bad investment in the first round, and Kansas City has other areas of need it could address with its top pick. Looking at the WR's drafted since 2000, and you can see there are as many (if not more) busts than good players. Plus, many teams have been able to find and develop pro bowl wideouts drafted in the later rounds. The Packers just won the superbowl with one of the best wideout tandems in the league, and its WR corps features two second rounders, a third rounder and a seventh rounder.
The Chiefs best bet would be to immediately address the position via free agency. So here is a crazy idea - why not sign Plaxico Burress? Burress has proven he can play at a high level, and he will be released from prison in June. Michael Vick proved this year that guys can stay in playing shape while in prison, and the Eagles were rewarded by being the only team to take a chance on the troubled former star. Burress can be signed for almost nothing, and what do the Chiefs have to lose?
at 3:02 PM

I agree. Burress was a serious threat on the field with the Giants and it was PAINFULLY obvious when he left. Manning was completely screwed without Burress and the Giants knew it. If it weren't for the Giant's incredible defense, they wouldn't have even been a blip on the radar screen this year.

What happened with all of the talk about signing Larry Fitzgerald? Is he still in the mix?

The Chiefs need younger talents. Burress is too old, bottom line. Here is a list of available receivers that are all under 29 years old:

It would be great if the Chiefs could grab a young WR who also has proven to be a big time NFL player.

My point with Burress is that the Chiefs could sign him for next to nothing, and it is a low-risk, high-reward move. Much like the Vick signing by the Eagles, if he causes trouble or doesn't work out, you can release him.

The Chiefs still have some holes to fill where its money could be better spent than swing for the fences with a young wideout.

Boy, were you wrong. Plaxico was a STAR this season. Chiefs are idiots. They will pass on even better free agents this season I'm sure.

Great prediction, Kansas City News! The Chiefs should read this news site more often, they really missed a great free agent pick up with Burress. He was incredible this season - 3 touchdowns in ONE GAME.