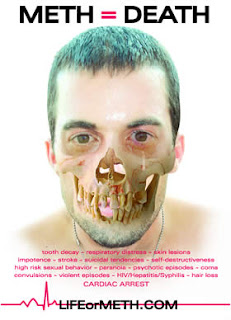 Police were called to a Burglary in progress this morning in the Ruskin Heights area of Kansas City. When they arrived they found two white males (in Ruskin?) outside a vacant house. One man had a 3 foot long metal pole in his hand. When confronted by Police and told to drop the pole, the man charged. Big mistake - DRT (Dead Right There). If you prefer to live, do follow the directions of a Police officer. Their main goal every day is to return home in one piece, and they will shoot you if they feel their lives are threatened.

The dead man is one Kenny Gurley, 40 years old. He was killed in the back yard of the home directly behind where he lived with his pregnant girlfriend. Kenny is (was) a Meth Addict. Know this, if you do Meth - IT WILL KILL YOU - one way or another, eventually it will kill you.

A few burglaries had been reported in the neighborhood in the last week. According to his family, Kenny had been clean for a year and started a guttering business before recently relapsing into his Meth Habit. Sad, for his family - Sad for his unborn child.

Also sad for the Police Officer that had to pull the trigger. It can't be easy to shoot someone, and of course later to find out that person had a child on the way - and incidentally, Kenny was probably a decent fellow when not doing drugs. I've known a few like him.

Of course, the family will likely sue the Police Department - another frivolous lawsuit for the courts. Remember kids, Drugs are Bad, mkay.
at 9:41 AM

FIRST OF ALL I DON'T KNOW WHO YOU THINK YOU ARE (MR. WONDERFUL) BUT I DOUBT YOU EVEN KNEW THIS MAN TO BEGIN WITH, HE WAS VERY GOOD MAN, HARD WORKER, LOVED HIS KIDS WITH ALL OF HIS HEART, HAD ANOTHER BABY GIRL TO BE BORN IN FEBRUARY. I KNOW THIS MUCH: I KNOW THAT THIS PATICULAR POLICE DEPT. KNEW HIM PERSONALLY, AND YOU KNEW HE WAS TOTALLY HARMLESS. AND JUST FOR THE RECORD "HE DID NOT HAVE A PIPE IN HIS HAND IT WAS I CURTAIN ROD." KENNY HAD TOLD ME IN THE PAST THAT YOU COPS WERE GOING TO KILL HIM AND HE WAS RIGHT. BUT WHO GIVES YOU THE RIGHT? YOU ARE NOT GOD AND THERE IS NO JUSTICE ANYMORE, JUST US.

I know, I've heard it before, He probably was a great guy when he wasn't high on drugs. The point of my post was that METH WILL KILL YOU. This situation is obviously too close to you to think rationally. I feel sorry for his kids that now have no daddy because this fool wanted to get high - and YOU didn't stop him. Don't take your guilt out on the Police.

mr wonderful is an ignorant, thats all i have to say

we're hearing it more & more, mr. dont know a dam thing!! The police are shooting first & asking questions later!!! They should face criminal charges like anyone else. This sort of thing makes one afraid to pull over if said person is alone. It was 9:30 AM. & the so called facts are a sad attempt to make the police not look so bad!!! This cop may burn in hells fire!!!!

"mr wonderful is an ignorant"

Mr. Wonderful makes a great point that all of you probably know someone who is abusing drugs or alcohol and you don't do anything about it. The police don't just shoot someone for no reason. Somehow that guy put himself in harm's way and although sad, he paid the ultimate price for it. But please people, go buy a hooked on phonics DVD and learn how to spell and write correctly, you might just finally make more than 13.85 per hour then. Or am I being too generous?

Your a dumb ass Mr. Chiefs Fan.... Don't put down Independence Schools. These young cop "Hot Heads" who never made anything out of themselves in school are "trigger happy"!!!!! Now that is sad. Why the FBI is investigating a very large number of "Bad Cops"! It's a shame, maybe if they took out someone in your family or ran over your child.... They wouldn't seem like the cream of the crop!!! I have seen so many crooked , drug cops it makes me sick! Perhaps your one!!! Get yourself some help or you just might experience a tragedy in your life! Good Luck!

Really? You're going to defend the Independence Public School system? Haha, that's hilarious. Anyway, I have never been shot at by the Police, and I'm betting that most of you haven't either. The point is, you have to do something pretty fucked up to get the cops to shoot at you. Seriously.

ok well i am his younger nephew Tyler Gurley and for one thing Mr.Wonderful your fukcing dumb Kenny was a very good person he was a father of 4 and had another little girl on the way he went to church every sunday with his family and he was clean for a very long time this was an complete tragedy for the whole family people in our family cry every day about this MURDER and i repeat MURDER by a ROOKIE COP. When he was shot and killed for one he did not have a weapon and 2 he was left in the back yard dead for like 3 or 4 hours covered up with a yellow trash bag for crying out loud before they picked him up main thing i have to say is KCMO Police are crooked and wrong and we will get JUSTICE and the cops that got called to this call could of handeld it so much more different they did not have to MURDER a good person like that. And he was very successful at his construction bussiness.

Hmmm, gonna have to argue with you Tyler Gurley on the "your fukcing dumb" quote that you so eloquently wrote above - Independence School District I'm guessing? Poor kid, you have a nice long life of mediocrity ahead of you. Mr. Wonderful happens to have a MASTERS degree and though I'm sorry about what happened to your uncle, he was a METH HEAD. Let me say it again, a METH HEAD. That's all that needs to be said here son.

HE was probably a nice guy on the stuff to if he managed to love his kids and wife and with another baby on the way it looks like all he ever did was love , love his kids love his wife and love his party drugs i know from experience just because you are high on meth dose NOT make you a bad person in fact all i ever did on meth was have sex , it's great once in a blue moon for sex but every day use YES i agree IT WILL KILL YOU , but using meth dose not make you a bad person .....

Bwah-hahaha! This is PRECIOUS, the meth heads and white trash are coming out of the woodwork and trying to form sentences and spell. Hee hee, it's so precious when they try :)

Your spelling and grammar are very close! A few more years of junior high school and you might be able to form a sentence and spell the word "that's", it's called a conjunction. Don't lose that drywall job.

Well, that all sounds great. Let's all do some meth, make some babies and love them. Let us know how prison turns out for you. Maybe while you're in there you can work on getting your GED and learn how to form a complete sentence. See you at the gas station!

Aw, the white trash girl quoted a rap song and wrote in all capital letters. Now that is impressive. I bet you got a C- one time on that math test in sixth grade and your mother was so proud. You go girl! You guys commenting in here have some real potential in life.

Why are we feeling bad for a meth head carcass? They all deserve to die. Meth heads should be shot in sight

AUTOPSY says clean... NO Meth... I to have a degree. YOUR A JACKASS... SINCERELY Bryan Gurley.