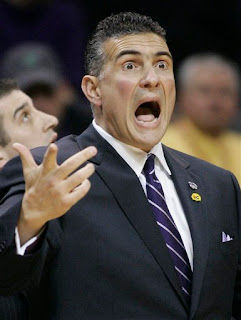 It is officially do or die time in Manhattan. If K-State has any chance to salvage its embarrassing season, one that started with the Wildcats ranked third in the nation and picked to win the Big 12, it has to defeat the number one ranked Kansas Jayhawks.

After losing to Colorado on Saturday, Joe Lunardi has placed the Wildcats on life support in his current NCAA projections. K-State is currently listed as an 11th seed and falling fast, a far cry from the lofty expectations it once had. In the current Big 12 standings, KSU sits behind Colorado (who swept the Wildcats this season) in a four way tie for seventh place with Nebraska, Oklahoma State and Oklahoma.

Everything is on the line tonight. KU is as weak as it has been all season on paper, missing starting guard Josh Selby and key reserve Thomas Robinson due to injury. Unfortunately for K-State, the Jayhawks have been playing lights out recently. A win over KU would give Frank Martin's team a signature win over the nation's top-ranked team, while a loss all but mathematically knocks the Wildcats out of the big dance. Its time to see what K-State is made of.
at 11:58 AM