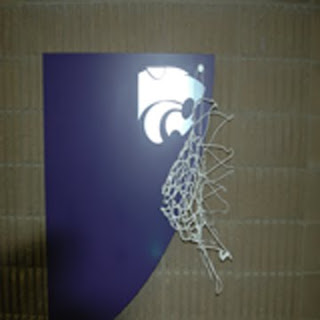 KState salvaged its season in a big statement win over KU in Manhattan, and its fan base deserved to celebrate and savor the win. However, once again KState's inferiority complex with KU is too much for them to overcome, and they have taken a regular season win at home further than anyone would have thought possible.
KState's athletic department is already selling DVDs of Monday's victory. Thats right, not a DVD for a national title, or a Big 12 title, or even a a Big 12 Tournament title. One regular season win. Granted KU was ranked first and is KState's "rival," but a DVD?
Wait, it gets better. Not only can you buy a DVD of the win, but KState is also auctioning the nets from the game. Most teams only cut down and display game nets when it wins a league or punches a ticket to the Final 4. KState? Well, a regular season win to get back on the tournament bubble merits acting like you've won it all. I know the athletic department needs some money after the Ron Prince scandal, but come on.
This is why no one can take KState and its fans seriously. KSU was ranked third in the preseason polls and was the runaway pick to win the Big 12. It was expected that the Wildcats would knock off KU at home. After a few losses, KState has already reverted back to its late 90's form, expecting to lose and going bonkers if it beats KU. If KState wants to know why KU fans act so "arrogant" and "cocky" this is why - because when you beat us, it merits a DVD and auctioning the game net.
at 8:17 PM

How about you do some research sometime and realize this isn't about KU vs KSU. K-State Athletic Department has been selling nets via auction this entire season. Nice try though....

Ok, has it been selling DVD's after each win?

Actually they have been selling DVDs after every home game (football and basketball) as well. A lot of Alumni Assoc. often order these to have replay parties and promote their perspective programs......

Either way, that is weak. KSU is a "bubble" team at best and I guess you guys can do whatever you want way out there in the middle of nowhere - phssshh, Manhattan? You guys definitely need a lot of DVDs to keep from killing yourself from boredom.

My picking order of coolness goes:

Although the good news is, today all three of our local teams won big - so everyone should be happy.