Atlanta Falcons trade up to get Julio Jones WR 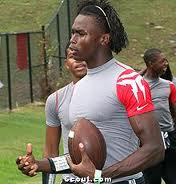 Trading up from 27th pick to the 6th pick, The Atlanta Falcons select Alabama wide out Julio Jones.  The trade will involve the Cleveland Browns and will mean that the Falcons will give up their second and fourth round picks this year, and their first and fourth picks next year.

It is rumored that the Falcons were very interested in Georgia wide out A. J. Green, but of course he was selected by the Cincinnati Bengals in the 4th round.  This makes it very appearant that the Atlanta Falcons were desperate to get a wide receiver in the 2011 NFL Draft.

I'm thinking that this was probably NOT a good decision by the Atlanta Falcons, but they do have a lot of talent at QB with Matt Ryan.