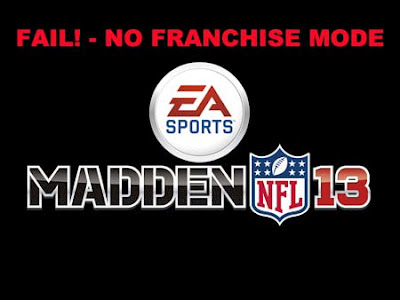 How many of you are out there with your brand new copy of Madden 13 loaded up and looking for Franchise Mode? Well, you can stop looking...it's gone. In a recent interview with Josh Looman, who made the latest changes to Madden, VentureBeat asked about the fan favorite Franchise Mode and what happened to it. Josh replied  "The primary motivation was to create a new, innovative career mode that allowed you to play as any coach or player in the same universe." Yeah, IF YOU ONLY PLAY BY YOURSELF. The new so called "Franchise Mode" in Madden 13 is created for play by only one person at a time, at home, by themselves. Do the powers that be at EA sports think that the only people who play their games are loner losers with no friends? Essentially, Madden 13 has taken away some of the features that fans have enjoyed for years (since 1992 for us) and basically turned this game into a first person shooter.

What makes this even more frustrating is the fact that EA Sports HAD TO HAVE KNOWN the mistake they were making because there is a giant menu item on the front screen that says "Looking for Franchise Mode?" and then it goes on to tell you to go create a coach or something incredibly lame like that - oh, and by the way, the coach has NO control over the roster, and who the hell wants to be a coach anyway? There are many things missing in Madden 13 and the fans are NOT happy. Here is the short list of items that are no longer available:


In the end, looking back at last year, it's true, everyone was on the message boards complaining about the new passing / throwing motion, etc when Madden 12 first came out, but we got used to it, dealt with it and resumed play as usual. But this year, they have damaged the game beyond repair as many of the modes that players used are just GONE. The Franchise Mode has been in place since the very beginning (it used to be called "Season Mode") and judging from the overwhelming comments around the net right now, EA Sports is going to be forced to put Franchise Mode back in the game in 2014 or lose a LOT of customers. EA needs to understand that even though the new programming director might sit at home alone playing by himself online and he is just thrilled with the new game, but hey dork boy! Some of us have friends, and we like to get together and drink beer and join forces as our favorite teams and take them from the Preseason all the way to the big game over the course of several weeks and months. To us, that was the point of Madden. If we wanted to sit at home alone and play by ourselves online with a little dorky microphone on our heads, arguing with other dorks with microphones on their heads, we would just play Call of Duty. EA Sports has killed the multiplayer element of Madden that has held true for 20 years, great job guys.

On a closing note, if anyone out there can figure out a way (on Madden 13) for multiple players, playing at the same house, on the same team, with players that they have created, on the same PS3, and play an entire season together with all data saved we will personally pay you $100.00 via PayPal - just email us at kansascitynews@gmail.com - good luck!

you are so right. my friend and I played at least 7 seasons. this is fucking retarded.

Man hell yeah this is the exact reason I didn't buy madden 13. Me and three of my friends would play a franchise on the same system in the same division or conference to see who was the best and now that has been removed from us. Then we can't even edit players. Let us at least be able to edit numbers and position...smh ea Yall lost a lot of money with this madden