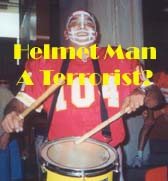 Known to most Kansas City Chiefs fans as "Helmet Man", or even Edgar Sanchez, former terrorist informant Wahed Moharam charged into the State Building in downtown Kansas City freaking out and yelling out the question "why am I on the terrorist list?" and somehow alluding that there was a bomb in his car, which was parked in a handicap space near the State Building.

When the story first broke the news misquoted Helmet Man as saying the "he was a terrorist" but he did not say that, he simply demanded to know why he was listed as a terrorist on the FBI's watch list. In 1993 Wahed Moharam helped the United States capture 3 known terrorists connected with the World Trade Center bombing and was subsequently put into the witness protection program and given the name Edgar Sanchez. He moved to Kansas City and became an avid and outspoken Chiefs fan known to fans as "Helmet Man" donning an airbrushed helmet on his bald head and beating on a drum strapped around his neck. In 2003, his season tickets were revoked due to his being added to the FBI's Watch List as a precaution by Chiefs administration.

It seems that Wahed Moharam was very upset at the fact that he had helped out the United States government and then was somehow added to the FBI's Watch List and started having bad things happen to him, like losing his Chiefs season tickets. Helmet Man's car is still being searched after bomb sniffing dogs sent up an alarm, which in turn brought out the bomb seeking robot who found a hand gun but nothing else so far.

In another breaking story that happened right in the middle of this, a man drove into the Arrowhead Stadium parking lot, shot and injured a woman in a golf cart and then shot and killed himself.

When they agreed, she told them that all the blue-eyed children were better than the brown-eyed children and gave them special treatment. how to stop xtremism