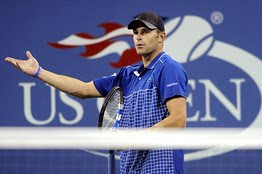 Andy Roddick bowed out of the US Open at the earliest stage of his career, falling to unseeded Janko Tipsarevic 3-6, 7-5, 6-3, 7-6 (7-4) in the second round last night. Roddick looked flat, berated a lineswoman for several games and then turned his frustrations on to the head official. It was a sad display from the world’s former number one player, who may never recover from losing his epic Wimbledon final against Roger Federer last year.

Roddick’s reaction to a correctly called foot fault was uncomfortable to downright embarrassing. Rather than focus on the task at hand, he continued to argue and berate both the lineswoman and the head official. Roddick improved his play after the incident, but was no match for Tipsarevic who played very well and kept Roddick on his heals all night. Roddick looked flat, going through the motions more than trying to win the match. By the time he started playing better, it was too late.

The poor play and embarrassing outbursts has been a continuing trend for Roddick this year. He has never recovered mentally from losing the marathon final against Federer at Wimbledon last summer, and if his recent play is any indication, he never will. Roddick has won a grand slam and had a great career (he also has a hot wife in case you wondering), but it is time for the next great American player(s) to step up.