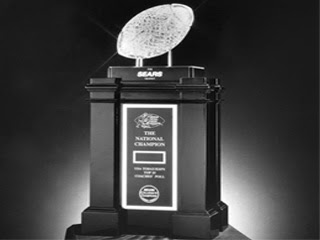 The first BCS Standings have been released, and the Oklahoma Sooners find themselves currently in first place. OU, who is undefeated in the always tough Big 12, narrowly edged Oregon. Despite its early season success, the Ducks may be in a difficult position. With an easy schedule remaining Oregon could get passed up for a title shot by an undefeated SEC team.

The Boise State Broncos find themselves in third, much to the dismay of its fanbase. The Broncos looked good in wins over Virginia Tech and Oregon State, however the weak WAC will likely keep the Bronco's out of the title game. At this point, BSU needs a lot of chaos to happen in the top 5 to have a shot.

As usual, the SEC has a few wildcard teams that could find themselves in the national title hunt all year. LSU is ranked first by many computers, and both the Tigers and Auburn will be in the mix baring any upsets. The Big 12 also has a few surprise teams in the unbeaten category in Missouri and Oklahoma State. Both schools have tough remaining schedules, but a few upsets could throw one into the mix at season's end.

The BCS race hasn't been this wide open since 2007, and every week seems to be full of upsets. With Nebraska and Ohio State both losing this past weekend, the field has started to shrink. Boise State will need several more weekends like this past one to have any chance at a national title game appearance.
at 2:08 PM No comments: