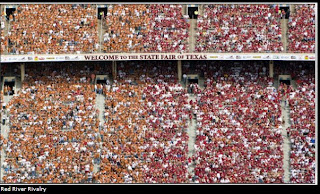 Week one is full of great matchups and plenty of intrigue. By tonight, the Big 12 race will have some clear favorites. Let the fireworks begin.
at 9:00 AM No comments:

Big 12 Preview: League as Wide Open as Ever 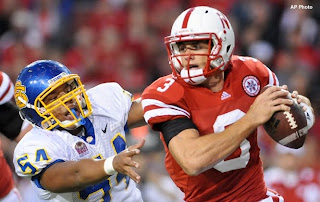 With most Big 12 schools starting conference play this next weekend and the non-conference schedules almost wrapped up, the league picture is starting to come into focus. If the non-conference results are any indicator, this could be the most wide open league the Big 12 has seen in its history as a conference.
The conference remains wide open mostly due to the struggles of the league's two perennial top teams, Texas and Oklahoma. Texas struggled all non-conference play, and its problems finally cumulated in a blowout loss to UCLA. Oklahoma, picked by most pundits to win the league, has remained undefeated so far. Despite the perfect record, it has been anything but easy for the Sooners. OU hung on to beat Air Force and then narrowly escaped Cincinnati. None of these teams are that strong, and if there is any year that a team not named Texas or Oklahoma makes a run at a Big 12 title, this could be it.
One team that could push UT and OU is Nebraska. The Huskers finally appear to have a dangerous offense to go with its stout defense now that Taylor Martinez is behind center. However, the team struggled against FCS South Dakota State saturday, and the Huskers have struggled to remain consistent the last several seasons under Bo Pelini. Other teams picked to finish high in the league, such as Missouri, Texas A & M and Texas Tech have all struggled against lesser teams during the non-conference schedule as well. Add these teams to a team like Kansas who lost to an FCS opponent in week one and then beat last year's ACC champion in week two, and it is hard to figure out how the Big 12 play will shape out.
While its hard to pick against Texas and Oklahoma once again being the class of the Big 12, the two juggernauts have looked beatable so far this season. The only problem is, few if any other Big 12 schools seem ready to challenge them. While predicting the league is tough, one thing is for sure: this is the closest from top to bottom the Big 12 has ever been.
at 7:28 PM No comments: